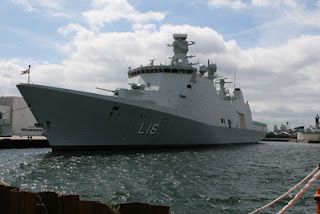 With a hat tip to commenter "Hyperchaotic" to an earlier post, a disappointing report of the result of capturing pirates at sea :Pirates released on beach:

After six days on board the Danish warship Absalon, ten Somali pirates were put ashore on a Somali beach during the night and set free. All 10 pirates were in good health and were landed in the area they are believed to have come from.
***
Although their personal effects were returned to them, all weapons, communications devices and ladders were confiscated.

The decision to release the alleged pirates came following discussions Tuesday between Denmark's foreign and defence ministries on exactly what should happen to the 10 men. Although Absalon is on a U.N. sanctioned mission and part of an international force, the legal conditions surrounding the detention of suspected pirates is unclear.
***
"It is an illusion to think that these 10 would be brought to trial by the Somali authorities," says Commander Dan B. Termansen of Admiral Danish Fleet Headquarters.

Comm. Termansen said that if countries from which pirates emanate are not prepared to take cases to court 'there's nothing we can do'.

This is so wrong.

Wait until one of these released pirates kills a crewman or passenger on a ship...

I find Article 105 of the United Nations Convention on the Law of the Sea to be pretty clear:

Maybe the Danish ship lacks yardarms... or something...

UPDATE: More on the release here:

"It was the lesser of two evils, for the other solution, which would have made me uneasy, would have been to hand them over to a regime where they risked being tortured and killed," Defence Minister Soeren Gade told Denmark's TV2 news.

Gade announced the news to deputies late on Tuesday, saying that under Danish law it was not possible to prosecute them because of a lack of evidence.

They had considered transferring them to other vessels in the multinational Task Force 150 fleet operating off the coast of Somalia, but rejected the idea, he added.

On September 17, just two days after taking command of the task force, the Danish navy vessel Absalon intercepted two suspect high-speed boats spotted by a Danish helicopter in the Gulf of Aden and detained the 10 armed men on board.

I am just stunned. The standard of evidence must be pretty damn high in Denmark...

UPDATE2: Is it just me, or does it seem to you that the question about what to do with any captured pirates should have been addressed before setting sail to patrol pirate infested waters with the intent to take on the pirates?
Posted by Mark Tempest at 9/24/2008 01:41:00 PM