As the pressure on them mounts, the Somali pirates holding the Ukrainian ship full of tanks are having fights over what to do and one of these squabbles cost three of them their lives, as set out here:

Andrew Mwangura, of the East African Seafarers' Assistance Programme, a local maritime group, said an argument broke out last night between factions in the 50-strong pirate gang over whether to give in to international pressure to free the cargo and 20-man crew.

"There was a misunderstanding yesterday between the moderates and the radicals on board who do not want to listen to anyone," said Mwangura, whose Kenya-based group is monitoring the saga via relatives of the crew and the pirates. 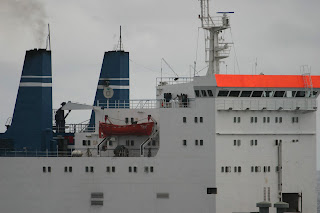 "The moderates want to back-peddle. The Americans are close, so everyone is tense. There was a shootout and three of the pirates were shot dead."

The U.S. has several ships nearby.

UPDATE: Another Malaysian ship has been released by other pirates after a ransom was paid, as set out here:

Pirates have released a second Malaysian tanker hijacked near Somalia in exchange for a ransom, the ship owner said Tuesday.

Chairman Hassan Marican said a ransom was paid for both vessels but declined to reveal the amount. All 79 crew, including 14 Filipinos, on both ships are safe but are traumatized and will undergo counseling, he said.

Malaysian navy warships are escorting the two tankers, which are expected to reach neighboring Djibouti in the next few days, he said.

Hassan slammed Malaysia's local media for speculating that a total ransom of US$4 million was paid.

"You have made MISC a target for the pirates in the future by disclosing an amount that is incorrect," he told reporters. "Going forward, we will take necessary steps to protect our vessels and our crew."

The standoff in the Indian Ocean over a ship laden with tanks and weapons entered a sixth day Tuesday, with pirates claiming they were celebrating the Muslim feast of Eid al-Fitr despite being surrounded by American warships and helicopters.
A photo from the USS Howard shows Somali pirates in small boats hijacking the MV Faina last week.
***
"We are happy on the ship and we are celebrating Eid," pirate spokesman Sugule Ali told The Associated Press by satellite phone. "Nothing has changed."