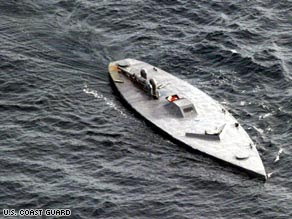 To the Men and Women of the Coast Guard:

I'm proud to tell you that over the past five days, Pacific Area Coast Guard units, with the help of our U.S. Navy and interagency partners, seized over 14 tons of cocaine from two Self-Propelled Semi-Submersible (SPSS) vessels in the Eastern Pacific Ocean. On 13 September, a Navy maritime patrol aircraft (MPA) detected an SPSS in international waters and vectored a Navy ship, with a Pacific Area Law Enforcement Detachment (LEDET), to intercept it. After conducting an unannounced nighttime boarding, the LEDET discovered 7 tons of cocaine. Then on 17 September, another Navy MPA detected an SPSS and vectored the cutter MIDGETT to investigate. MIDGETT's boarding team subsequently discovered an additional 7 tons of cocaine. SPSS vessels have become the conveyance of choice for narcotics smugglers. I have attached a background paper on these vessels so you can understand the unique challenges they present to our law enforcement personnel.

Congratulations to LEDET 404 and MIDGETT for making these seizures, and to the Pacific Area and Eleventh District staffs for coordinating the interagency law enforcement process. Their courage, dedication and professional expertise prevented these dangerous drugs from reaching American cities. The interoperability between Coast Guard and Navy assets has never been more effective. Our DOD and interagency partners are a critical force multiplier making such interdictions possible. We will continue to enhance those relationships. As satisfying as it is to tell you about these seizures, we need to understand that SPSS vessels represent a much larger threat.

The SPSS seized on 13 September was the most sophisticated one we have ever detected. Its propulsion, steering, and exhaust systems were much more advanced than earlier versions and its electronic suite rivaled those found on professionally constructed commercial vessels. SPSS vessels are built solely for illicit purposes and it's obvious that transnational criminal networks are investing heavily in this technology.

To date, SPSS vessels have been used to smuggle cocaine from South America to the United States but they could be converted to smuggle terrorists or weapons of mass destruction. Through current legislation pending in the Congress, we are trying to criminalize the operation of stateless SPSS vessels on international voyages. This will allow us to prosecute SPSS operators, deter the use of these vessels for other illicit purposes and increase the safety of Coast Guard boarding teams.

This vessel is just one of the many global maritime threats we deal with on a daily basis. We will continue to work across the federal government and through the international community to develop solutions to new challenges that demand our ingenuity, dedication and commitment. It's an exciting time to be in the Coast Guard. Every Active Duty member, Reservist, Civilian or Auxiliarist, whether stationed at an operational unit or directly supporting one, plays a critical role in protecting, saving and defending the American public. Thank you for being a Guardian.

The U.S. Coast Guard Cutter Midgett and a U.S. Navy maritime patrol aircraft teamed up to interdict a stateless, self-propelled, semi-submersible vessel Wednesday with seven tons of cocaine aboard approximately 400 miles south of the Mexico-Guatemala border.

The 60-foot, self-propelled, semi-submersible (SPSS) craft was detected by a U.S. Navy aircraft. The aircraft vectored Midgett to the location of the SPSS whereupon the Coast Guard quickly commenced a boarding of the stateless SPSS. The Coast Guard boarding team located 295 bales of cocaine, valued at more than $196 million, in a huge forward compartment. The SPSS became unstable and began to sink during the transfer of the bales of cocaine from the SPSS to Midgett. The condition of the vessel made it unsafe to tow and Midgett's crew sank the vessel as a hazard to navigation.

Wednesday's interdiction follows a daring nighttime boarding and seizure of another SPSS on Saturday in which the Coast Guard boarding team, embarked aboard the USS McInerney, surprised an SPSS with four suspected smugglers using the cover of darkness to take positive control of the SPSS. The smugglers attempted to throw the boarding team into the sea by reversing the SPSS engines suddenly, and attempted to scuttle the vessel, but the boarding team compelled the smugglers to comply with orders to close the scuttling valves. Seven tons of cocaine were seized from the SPSS and the USS McInerney took the SPSS in tow.

"I'm proud to tell you that over the past five days, Pacific Area Coast Guard units, with the help of our U.S. Navy and interagency partners, seized more than 14 tons of cocaine with a street value of more than $383 million from two self-propelled, semi-submersible vessels in the Eastern Pacific Ocean," said Adm. Thad Allen, Commandant of the U.S. Coast Guard. "The interoperability between Coast Guard and Navy assets has never bee more effetive. Our Department of Defense and interagency partners are a critical force multiplier making such interdictions possible."