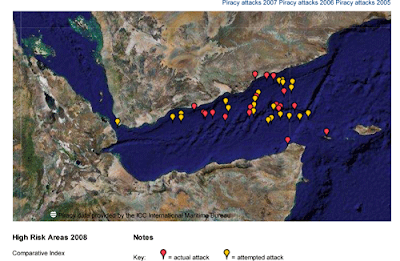 The weekly Piracy Report from ICC Commercial Crime Services (to 8 Sep 08) can be found here. The map is an image of a portion of the live map available at the ICC CCS site. Highlights:

-07.09.2008: 1020UTC: Posn: 12:46N - 045:54E: Gulf of Aden. Pirates, in two speedboats, chased a bulk carrier underway. Owners contacted the IMB Piracy Reporting Centre (PRC) for assistance. Duty officer at the PRC immediately informed the authorities to render necessary assistance and relayed the same to the master. Master advised to enforce anti piracy measures to delay / prevent boarding. The authorities advised the Centre that every effort was being made to send assistance to the vessel. At 1343, UTC master reported that pirate boats had stopped chasing and that vessel was continuing passage to destination port.

-06.09.2008: 0707 UTC: Posn: 12:57.8N - 047:01.6E, Gulf of Aden.About six pirates armed with RPG in a white speedboat approached a LPG tanker underway. Alarm raised, foghorn sounded, crew mustered and chief officer directed fire hose towards the boat. The pirates signalled to reduce speed and pointed RPG at the chief officer, who dropped the fire hose and entered the accommodation. Master increased ship speed to maximum and took evasive manoeuvres by giving large helm orders. This resulted in the speedboat rolling heavily, causing four pirates to fall overboard. The speedboat recovered the pirates and resumed chasing the tanker again. Mayday broadcast made and SSAS activated. UKMTO Dubai and IMB Piracy Reporting Centre informed. The Centre immediately informed the coalition forces. The speedboat came close to the tanker, but later gave up the chase and met up with a pirate mother vessel that was a raft with an orange cover. A passing ship informed that coalition warships were proceeding for assistance and were calling the tanker on VHF.

-05.09.2008: 0510 UTC: Posn: 12:57.5N - 047:04.0E, Gulf of Aden. A general cargo ship underway, noticed a blue coloured tug suspected to be a pirate mother vessel, towing a small boat. The small boat suddenly proceeded at high speed and approached the ship. D/O raised alarm and crew mustered. Four pirates, armed with RPG and automatic weapons fired at the ship in an attempt to board. Master increased speed and took evasive manoeuvres. Crew activated fire hoses and threw hard objects to hit the pirates. Pirates kept on firing at the ship and at 0600 UTC the pirates gave up the attempt and fled.

03.09.2008: 0930 LT: Posn: 14:27N - 049:40E, Off Al Mukalla, Yemeni coast, Gulf of Aden.
12 pirates, armed with automatic guns and RPG in a small high-speed craft attacked, boarded and hijacked a ship along with her 25 crewmembers. They stole crew personal belongings and all cash onboard. Further details are awaited.

-03.09.2008: 1450 UTC: Posn: 13:36.8N - 049:13.16E: Gulf of Aden. Two small boats attempted to board a bulk carrier underway. Vessel increased speed and altered course to prevent boarding. The boats aborted attempt to board and moved away. A coalition warship arrived at location.

-02.09.2008: 1853 UTC: Posn: 11:48.42N - 050:32.00E, Gulf of Aden. A yacht enroute from Cocos (Keeling) islands to Aden, Yemen has been attacked and hijacked by pirates. Further details are awaited.
***
-23.06.2008: off Somali coast, Somalia.
Pirates attacked and hijacked a yacht underway. They kidnapped its three crew members and held them on land for ransom. It is believed a ransom was paid for the safe release of the crew. All three crewmembers arrived safely in their respective countries. The yacht was believed to have been abandoned. A full report is awaited from the authorities.

Probably ought to be coupled with the last ONI World Wide Threat to Shipping Report (to 27 Aug 08) which can be found here. Highlights: