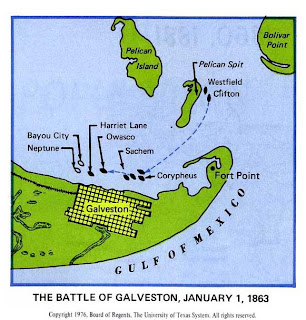 Once the most important port on the Texas Gulf Coast:

In 1860, on the eve of the Civil War, Galveston was the largest city in Texas and the major seaport for the state. The city’s population stood at 7,207, about 1,200 of whom were slaves. Galveston was a growing city; forty percent of her non-slave population was born outside the United States. Across the island’s wharves in 1860 passed 194,000 bales of cotton, three-quarters of the total shipped from all Texas ports that year. The editor of the Galveston News -- perhaps not an entirely objective judge of the matter -- estimated that Galveston’s commerce was growing at the astonishing rate of 50% annually.

During the Civil War, Galveston was the site of struggles to control its use:

The U.S. Navy began a blockade of Galveston Harbor in July 1861, but the town remained in Confederate hands for the next 14 months. At 6:00 am on October 4, 1862, Commander W.B. Renshaw, commanding the blockading ships in the Galveston Bay area, sent Harriet Lane into the harbor, flying a flag of truce. The intention was to inform the military authorities in Galveston that if the town did not surrender, the U.S. Navy ships would attack; a one-hour reply would be demanded.

Colonel Joseph J. Cook, Confederate military commander in the area, would not come out to the Union ship or send an officer to receive the communication, so Harriet Lane weighed anchor and returned to the fleet. Four Union steamers, with a mortar boat in tow, entered the harbor and moved to the same area where Harriet Lane had anchored. Observing this activity, Confederates at Fort Point fired one or more shots and the U.S. Navy ships answered. Eventually, the Union ships disabled the one Confederate gun at Fort Point and fired at other targets.

Two Rebel guns from another location opened on the Union ships. The boat that Colonel Cook had dispatched now approached the Union vessels and two Confederate officers boarded U.S.S. Westfield. Renshaw demanded an unconditional surrender of Galveston or he would begin shelling. Cook refused Renshaw's terms, and conveyed to Renshaw that upon him rested the responsibility of destroying the town and killing women, children, and aliens.

Renshaw threatened to resume the shelling and made preparations for towing the mortar boat into position. One of the Confederate officers then asked if he could be granted time to talk with Colonel Cook again. This officer, a major, negotiated with Renshaw for a four-day truce to evacuate the women, children, and aliens from the city. Cook approved the truce but added a stipulation that if Renshaw would not move troops closer to Galveston, Cook would not permit his men to come below the city.

The agreement was finalized but never written down, which later caused problems. The Confederates did evacuate, taking all of their weapons, ammunition, supplies, and whatever they could carry with them. Renshaw did not think that the agreement allowed for all this but, in the end, did nothing, due to the lack of a written document.

The Confederates did not let Galveston stay in Union hands, as they attacked in January 1863:

Maj. Gen. John B. Magruder, who became the Confederate commander of military forces in Texas on November 29, 1862, gave the recapture of Galveston top priority. At 3:00 am on New Year’s Day, 1863, four Confederate gunboats appeared, coming down the bay toward Galveston. Soon afterward, the Rebels commenced a land attack. The Union forces in Galveston were three companies of the 42nd Massachusetts Volunteer Infantry Regiment under the command of Col. Isaac S. Burrell. The Confederates captured or killed all of them except for the regiment’s adjutant. They also took Harriet Lane, by boarding her, and two barks and a schooner. Cdr. W.B. Renshaw’s flagship, U.S.S. Westfield, ran aground when trying to help Harriet Lane and, at 10:00 am, she was blown up to 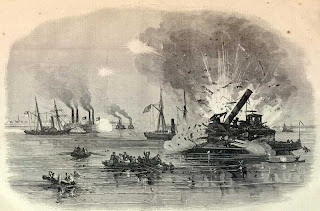 prevent her capture by the Confederates. Galveston was in Confederate hands again although the Union blockade would limit commerce in and out of the harbor.

A more vivid description of the action:

On October 4, 1862, the Federals who had been maintaining the blockade of the gulf coast made an attack on Galveston. The Confederate troops on the island were not strong enough to put up a defense, so they withdrew, without a struggle, to the mainland. The town of Galveston thus fell into the hands of the Federals, but it was not to remain in their possession long. When General Magruder assumed command of Texas two months later, one of the first things he determined upon was the recapture of Galveston. Preparations were secretly made for an expedition against the island. Two steamboats, the Neptune and Bayou City, on Buffalo bayou, were converted into "cottonclads" by erecting breastworks of cotton bales around their decks, and these were manned by Sibley’s brigade, a body of tried troops, under command of Gen. H. H. Sibley, which had just returned from a campaign in New Mexico. Two other vessels, the Lucy Gwinn and the John F. Carr, were put into service as tenders. On December 29, 1862, General Magruder arrived at Virginia Point to direct the expedition in person. The plan of attack was for Magruder and a body of land forces to enter the town of Galveston from the mainland, while the boats under command of Sibley engaged the Federal vessels by sea. There were four Federal vessels in the harbor, the steamer Harriet Lane, which was at the wharf; the brig Westfield, the gun boat Owassee, and the transport Clifton. On the night of December 31 the movement was begun. Magruder and the land forces proceeded from Virginia Point to the island and took a position in the town, in preparation for an early morning attack next day. Before daybreak on New Year’s day, 1863, Magruder opened fire on the Federals and drove them to the extreme northern end of the island. The cottonclads, in the meantime, arrived in the harbor and attacked the Harriet Lane. The Confederate boat Neptune was sunk in shallow water, but the Bayou City approached the Harriet Lane so close that she became entangled in the latter’s rigging. The Confederates leaped on board the Federal vessel and a hand-to-hand struggle ensued. After a stubborn resistance, during which the principal officers of the Harriet Lane were killed, the Federals surrendered. The Westfield, in attempting to leave the harbor, ran aground and, in order to prevent her from falling into the hands of the Confederates a train was laid to blow up the vessel and the crew abandoned her. There was some delay in

the explosion and fifteen Federals were sent back on board to investigate and remedy the defect. They had no sooner reached the Westfield than the explosion occurred, and all of the party were killed. The Federals on the island surrendered to Magruder and the Owassee and the Clifton escaped from the harbor and joined the fleet outside. Thus Galveston was recaptured in brilliant fashion.

Recaptured, but still under a Union blockade, which made for some difficult times:

Life in Galveston became increasingly difficult as the war dragged on. There were shortages of everything -- food, fuel, medicine and clothing -- and those things that could be found sold for tremendously inflated prices. Flour sold at $2 per pound and eggs at $4 per dozen; coffee could command up to $20 per pound. Rations issued to the troops were so bad that one regiment put an inedible slab of beef on a stick, paraded it through the town followed by muffled drums, and after a formal military funeral, buried it on the public square.

Fences, sheds and abandoned houses were torn down for firewood. Thefts, assaults and other crime became a common occurrence, as did cases of desertion from the military units on the island. When the Confederate commander at Galveston, General James M. Hawes, ordered the military commissary to stop selling flour to soldiers’ families, an angry civilian protest led to the so-called "Bread Riot" of 1864. Hawes re-issued an old and forgotten order declaring Galveston to be an "entrenched camp," which effectively placed the citizenry subject to martial law. An epidemic of yellow fever swept through the town in the fall of 1864. Over 100 soldiers, and an unknown number of civilians, died of the disease.

Blockade running began to take on a new significance in 1864. After the Battle of Mobile Bay in August 1864, in which Federal navy effectively closed the port of Mobile, Galveston was left as one of the few ports left in the Confederacy and the only one on the Gulf of Mexico. Only a dozen steam blockade runners had come into Galveston during the first three years of the war; now another runner entered the port almost every week.

Following the war, Galveston returned to prominence as the leading port of Texas, until September 8, 1900, when a devastating hurricane hit the island:

On this day in 1900, a Category 4 hurricane rips through Galveston, Texas, killing an estimated 6,000 to 8,000 people. A 15-foot storm surge flooded the city, then situated at less than nine feet above sea level, and numerous homes and buildings were destroyed. The hurricane remains the worst weather-related disaster in U.S. history in terms of loss of life.

Galveston has been the namesake of a couple of Navy cruisers, CL-19, 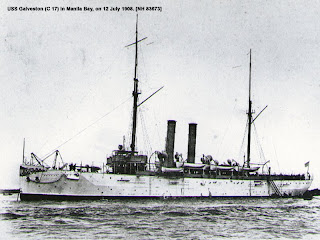 which saw action in World War I and CLG-3, 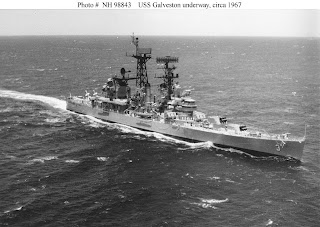 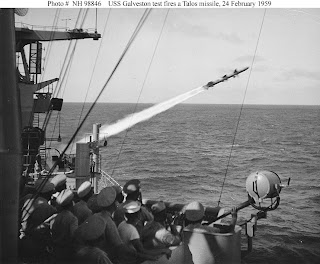 UPDATE: A more recent map of the Port of Galveston: