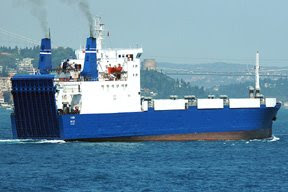 Pirates on Thursday seized a Ukrainian cargo ship off the coast of Somalia while it was en route to the Kenyan port of Mombasa, a maritime official told AFP.

The hijackers commandeered the Belize-flagged Faina to a yet unknown location, said Andrew Mwngura who runs the Kenya chapter of the Seafarers Assistance Programme.

"It was sailing from the Baltics and was expected in Mombasa on September 27," he added. "As usual, the pirates were armed on a speedboat when they seized the ship, but we do not know where they have taken it."

UPDATE: Ship photo from Shipspotting.com copyright Fehmi Ulgener. Larger view at that Shipspotting link. You might note that the ship is a Roll on- roll off (Ro-Ro) which mignt be of interest since it, as noted in the comments and here, that ship may be carrying 30 T-72 tanks...
Posted by Mark Tempest at 9/25/2008 04:47:00 PM