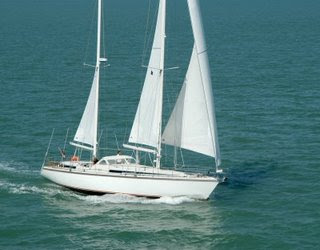 Once again taking action while other pay ransom, the French take back a yacht:

French navy commandos stormed a captured yacht off Somalia and freed its two crew after a battle with pirates who had been holding them for two weeks.

The night-time assault, in which one pirate was killed and six taken prisoner, was hailed by President Sarkozy as a complete success and a lesson to hostage-takers in the lawless seas off Somalia. "This is warning to all those who try to live off criminal acts. France will not accept that crime pays," he said.

The President directed the operation from the Elysée Palace, ordering the squad of 30 men to attack after it became clear that the pirates were taking the Carré d'As to the Somali mainland.

Jean-Yves and Bernadette Delanne, a retired couple, were safe and unharmed aboard the Courbet, a frigate. The navy vessel had been shadowing the yacht since it was seized on September 2 on a voyage to France from French Polynesia.