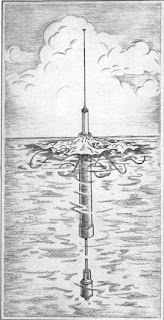 Detecting submarines is a challenge that arose with German U-boat threat in World War I and again in World War II. The earliest efforts involved putting sound detection gear on ships - essentially echo detection and ranging by sending out an sound pulse and its return echo (there are many better explanations available- see here).

Immersed sonar equipment works well on ships, but, as you might suspect, since aircraft are vital in submarine hunting, great minds thought that in addition to radar and visual detection of submarines, aircraft would benefit from the ability to use sonar, too. As set out here:

The sonobuoy, an air-deployed acoustic sensor, was invented during World War II in response to the challenge of an enemy submarine threat that was wreaking havoc on Allied shipping. And, to this day, the sonobuoy is one of the most effective means of conducting antisubmarine warfare (ASW).
***
In May 1941, P. M. S. Blackett, head of the British Admiralty committee for antisubmarine measures, proposed the idea of an expendable sonar system to be deployed from ships behind convoys for the detection of trailing U-boats. This concept was pursued in the United States with the Office of Scientific Research and Development, who awarded a contract to RCA Camden (which was headquartered in Camden, New Jersey) for the development of a ship-launched radio sonobuoy in June 1941.

RCA delivered the first models of its ship-deployable buoy in less than three months. The small, 60-pound sonobuoys were tested on September 12, 1941, at Barnegat Bay in New Jersey and proved the concept of an expendable sonobuoy. But, at that time, the U. S. Navy decided to pursue other, higher priority efforts. Work on the sonobuoy ceased until February 1942, when the expendable radio sonobuoy was resurrected tor use by lighter-than-air craft.

On March 7, 1942, two RCA ship-launched sonobuoys were monitored from a blimp as they tracked the S-20 submarine off New London, Connecticut. For the first time, an aircraft in flight detected a fully submerged submarine through acoustics using a sonobuoy.

The first air-droppable sonobuoys were packaged in a three-foot-long cylinder about five inches in diameter, a size that later became standardized as "A-size." Avoiding the use of materials critical in wartime, the outer cylinder for these first buoys was a quarter-inch-thick paper tube coated to keep it watertight for a few hours. Wooden disks at the ends of the combined electronics and battery compartment were sealed by adhesive tape and flexible pitch, providing watertight integrity. It had a half-watt radio transmitter tuned to one of six FM frequencies, used five vacuum 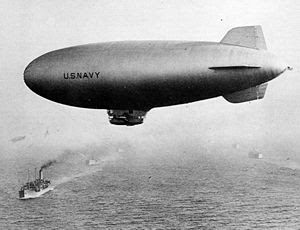 tubes and had a steel monopole antenna. Power was provided by flashlight batteries. The 24-foot-depth hydrophone was a broadband listening device made of rugged nickel magneto-striction material.

Originally intended to be dropped manually from blimps, sonobuoys were redesigned to be dropped from airplanes. In June 1942, the AN/CRT-1 became the first operational sonobuoy, and on July 25, 1942, the first successful launch of a sonobuoy from an aircraft was made from a U.S. Army B-18 bomber. 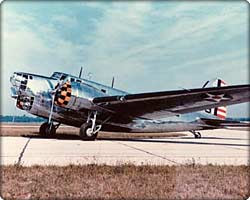 In February 1943, the design for the AN/CRT-4 directional sonobuoy began. A broadband passive sonobuoy with a rotating directional receiving hydrophone, the AN/CRT-4 was larger and heavier than the AN/CRT-1. It did not undergo testing, however, until early 1945, so it did not affect the war effort, and was not pursued further until 1950.
***
Approximately 40 percent of enemy submarines destroyed during the war were by aircraft, or aircraft in conjunction with ships. The utility of the sonobuoy in the war is indicated by the fact that, from October 1942 to the end of the war in 1945, the Navy had ordered 150,000 sonobuoys and 7,500 sonobuoy receivers.

The RCA sonobuoy seemed like it could help with the problem, with a blimp using sonobuoys to listen for the presence of a U-boat and then using MAD to close in on it. Field experiments were performed with prototype technology in March 1942, with a US Navy blimp hunting a Navy submarine.

Of course, if sonobuoys could be dropped from blimps (see here for a reference to sonobuoy-carrying blimps), they could be dropped from heavier-than-air aircraft as well. An aircraft test drop was performed by a Douglas B-18 Bolo bomber in July 1942. The USAAF became enthusiastic about the sonobuoy, and ordered over 6,400 of them in 1942. The "AN/CRT-1A" sonobuoy was in formal service by 1943, initially carried by USAAF Liberator ocean patrol aircraft out of Newfoundland and the UK. The US Navy hadn't followed through on the blimp experiments, but the USAAF experience convinced the Navy that the sonobuoy was a good idea, and the Navy bought almost 60,000 AN/CRT-1As during the war.

So for almost 70 years, the United States Navy has been employing an expendable system for the tracking of submarines: 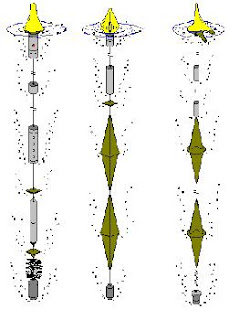 sonobuoy -short for sonar-buoy- is a relatively small expendable sonar system that is dropped from military aircraft performing anti-submarine warfare. The buoys are ejected from aircraft in canisters and deploy upon water impact. An infatable surface float with a radio transmitter rises to the surface for communication with the aircraft, while hydrophone(s) sensors and stabilizing equipment descend below the surface to a depth that is variable depending on environmental conditions and the search pattern. The buoy relays acoustic information from its hydrophone(s) via radio frequency to operators onboard the aircraft. 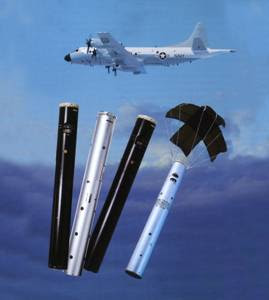 Passive buoys are deployed on the surface in patterns to allow precise location by triangulation. Multiple aircraft or ships monitor the pattern either passively listening or actively transmitting in order to drive the submarine into the sonar net. Sometimes the pattern takes the shape of a grid or other array formation and complex beamforming signal processing is used to transcend the capabilities of single, or limited numbers of, hydrophones.

In the 1980's, when airborne US Navy searched for submarines, passive sonobuoys typically performed the majority of initial detections. Passive tactics are used because they deny a submarine the knowledge that a tracking aircraft is present. The 'A' size sonobuoys discussed below can be air-launched since they all employ a parachute to retard their descent and provide descent stability. They can also be hand-launched over the side of a ship. All employ a battery, which is energized upon saltwater contact. Once energized, a mechanism for inflating a float with CO2 gas is activated, suspending the sonobuoy. The sensors are then released to specified depths. Passive sonobuoys use hydrophones to convert underwater sound into electrical signals, which are amplified and frequency modulated for VHF transmission. Some sonobuoys have precision-calibrated hydrophones. Most sonobuoys automatically scuttle within 8 hours of deployment. Sonobuoys are typically shipped in a Sonobuoy Launch Container (SLC) that serves as the shipping, storage, and aircraft launch container or in a gray overpack for pneumatic or free-fall launch.

For the DIFAR sonobuoys (Directional Frequency Analysis and Recording), the main sensor is a hydrophone that has directional detection capabilities. The latest generation of DIFAR sonobuoys offers various sensor types, electronic selection and post-launch control.

Modern use of sonobuoys includes operations in the complicated littoral area:

In the 1990s, the Cold War Soviet submarine threat gave way to the "Rest of the World" submarine threat with the proliferation of Russian and German submarine technology across the globe. Littoral ASW against quiet diesel-electrics was emphasized over deep water. New approaches to sonobuoys relumed to the early concepts of broadband acoustics and echo ranging. The AN/SSQ-110 extended echo ranging (EER) sonobuoy and the AN/SSQ-101 advanced deployable acoustic receiver (ADAR) were developed as the source and receiver, respectively, for this new version of Julie.

In addition, the AN/SSQ-53E DIFAR and AN/SSQ-57B passive sonobuoys were combined into the AN/SSQ-53F, with both passive directional and calibrated omni-directional capabilities, and the AN/SSQ-77C-added RF command function selection capability.

Sonobuoys can be laid from ships, small boats and other platform, with minor modifications. For more information about early sonobuoys, see here.

In addition to their military use,sonobuoys have been used in seismic studies.

In another interesting twist, sonobuoys may have a connection the famous Roswell, 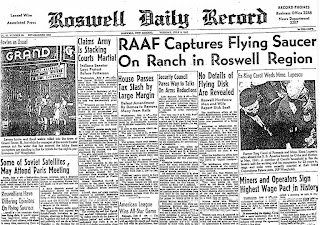 New Mexico, UFO incident, as set out here in reference to "Project Mogul" (see here for more information). The essence of that project was to investigate the use of large balloons and electronic equipment to detect "sound channels" in the atmosphere akin to the well-known sound channels in the ocean. Sometimes such projects have to make do with readily available equipment:

The objective of this trip, so far as NYU was concerned, was to perfect the handling of large flight trains of meteorological balloons and to evaluate the 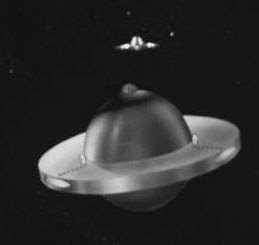 operations of altitude controlling and telemetering devices. (24) Already established before the trips to Alamogordo was that the use of the standard, 350-gram meteorological balloons, constructed of neoprene, was, at best, a "stop gap" method of achieving constant-level flight. (25) Balloons most suitable for this type of work were made 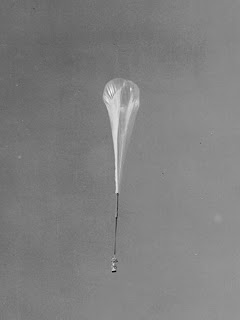 of polyethylene, a very thin, translucent plastic. These balloons, however, had just been developed, and, although the NYU group had contracted for some of them, the balloons had not been received until after the group departed for Alamogordo. (26) For Watson Laboratory scientists Peoples and Crary, the purpose of this trip was to experiment with different types of equipment to collect and transmit sound waves in the upper atmosphere. Therefore, just as the "balloon group" was using meteorological balloons as a stopgap method in attaining constant-level flight, the Watson Laboratory scientists utilized an AN/CRT-1A Sonabuoy while awaiting the delivery of acoustical equipment specifically designed for Project MOGUL.
***
Based on the above, it appeared likely that the debris found by the rancher and was subsequently identified as a "flying disc" by personnel from Roswell AAF was, with a great degree of certainty, MOGUL flight no. 4, launched on June 4, 1947. This conclusion was based on the following:

1. Descriptions of the debris provided by Brazel, Cavitt, Crary's diary, and the photos of the material displayed in General Ramey's office. These materials were consistent with the components of a MOGUL service flight, with neoprene balloons, parchment parachutes, plastic ballast tubes, corner reflectors, a sonabuoy, and a black electronics box that housed the pressure cutoff switch (Atch 3).

2. According to Brazel's July 8 statement, the debris was recovered on June 14, obviously eliminating any balloons launched in July.

3. Only two flights launched in June were unaccounted for, i.e., flight nos. 3 and 4. Flight no. 3, most likely would not have had the "unorthodox" configuration of corner 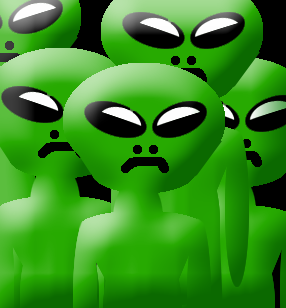