Navy Not Going to Do Littorals? Or Just Waiting for Right Ship?

David Axe asks whether the Navy Already Shifting Away from Shallow Waters? :

...Bob Work, a naval analyst with the Center for Strategic and Budgetary Assessments, says the Navy is shifting its focus again, before the inshore fighters have even joined the fleet... The shift helps explain the recent, apparently sudden, decision to axe the costly DDG-1000.
***
LCS is a lot of things -- fast, maneuverable, fairly inexpensive even after big cost overruns -- but it is not heavily armed, heavily armored or built to fight after heavy damage. LCS is meant for the fairly benign shallows, exclusively, and if that's a place that doesn't exist anymore, then LCS is a ship without a home.

Look, I understand the potential threats to the LCS and I question its costs and lack of armament - but there is danger in the littorals that only some sort of surface ship can address. It is my view that not building the LCS or the DDG-1000 could simply be a recognition that, due to the threats noted in the piece referenced in the linked Axe article, there needs to be a serious rethinking of what the U.S. needs for the nasty type of littoral work that billion+ dollar cruisers and destroyers shouldn't be doing while not tying up vast amounts of shipbuilding funds that could be used to maintain the "Blue Water Fleet" while giving the force something to use in the littorals.

It is clear to me that subs can handle a lot of the stuff the "stealth destroyer" appears to have been designed for. See here. Why spend tons of money to reinvent the stealth already provided by our undersea force?

My thinking is that the Navy needs to think about tender-like mother ships and lots of cheaper,smaller, faster, armored and well armed warships for the shallow water work. Use Admiral Cebrowski net working concepts and put some young gun SWOs out there to invent the new tactics for the littorals. Free the cruisers and destroyer to get back to their work.

This force ought to be the pirate fighting/sea lane protecting/offshore oil platform security/drug interdicting/inshore patrol group. Get together with the Coast Guard and really decide on a joint platform with easily swappable components.

Use as much COTs gear as you can.

Plan on on, say, 5 ship squadrons with 20 officers and 30 chiefs and 100 sailors who are not primary maintenance workers but gunners and system operators. Design excellent crew protection - leave habitability issues for the "mother ships." Have a couple of different size mother ships and be flexible depending on the threat level.

Treat these small boys like surface bound fighter aircraft - don't expect them to go off by themselves for 6 months - deploy them like an aircraft carrier and her embarked squadrons.

Co-opt a SH-60S squadron (or a big detachment) and work on inshore hunter-killer concepts and tactics. Hell, see if you can steal an AC-130 gunship (or develop something like it) and work on getting it "mothership" launch and recovery capable.


The goal is to control the sea, not surrendering pieces of it to our enemies because it's "too hard" to do it right.

UPDATE: Support for my thought? From SECNAV:

Building a more cost-effective Fleet through wiser investment will help us with the financial challenges we face, but it is only one part of the equation. The second part is figuring out what we need to buy, how to better choose the types of ships we need, and how many ships of each type we need to build. The key question for strategists and national security scholars to consider is, therefore, the following: How do we optimally match what we buy with the most likely threats we see in the future?

Answering this question requires an assessment of the risks we are likely to face, and an assessment by military and political leadership as to what levels of risk are acceptable. The right portfolio of ships will reflect these assessments. The Navy must constantly calculate and mitigate risk due to competing demands and resource constraints. Many important questions arise from this discussion of risks, to include: Are we prepared for all of the unknowns? Are we well-prepared for potential small-scale engagements that we might face? Is it wise or prudent to adopt a strategy of taking more risk in large conflicts that are of low probability? The "mothership" (tender) of the PGs from the past in a post at The Bow Ramp. There is little new under the sun... 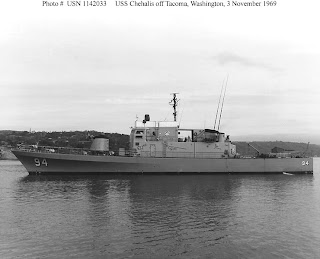 My understanding is that these were rough riding ships that wore out their crews in heavy weather.
Posted by Mark Tempest at 9/04/2008 11:47:00 PM