Why the U.S. Navy isn't using UAVs to Fight Somali Pirates --(update) unless it is... 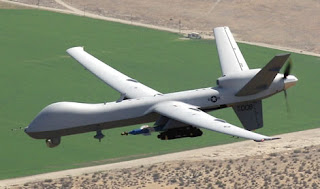 The Navy lags well behind the Air Force in the development of armed drones — the unmanned aircraft now used increasingly in Iraq and Afghanistan — insisting that its "Top Gun" fighter pilots are still smarter, better and more flexible in combat.

But the contrasting visions for the next generation of America's air arsenal point to wider debates within the military about the pace of incorporating remote-control technology into future battle strategies.

It also touches on differences in military cultures — with the Navy coming under criticism for its apparent resistance to substitute fighter pilot training and instincts with aircraft guided by operators who can be thousands of miles away.

For the moment, the Navy is deeply committed to plans for the F-35 fighter jet and developing a drone fleet strictly for surveillance and other non-weapon tasks. The Air Force, meanwhile, has used armed drones for years and appears to embody Pentagon trends to encourage drones as a way to reduce costs and consolidate personnel. 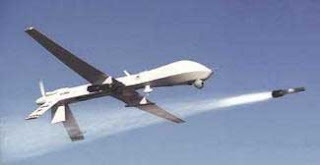 Defense Secretary Robert Gates, in a speech in April, called on the Air Force and other military officials to rethink "long-standing service assumptions and priorities about which missions require certified pilots, and which do not."

Gates added that "unmanned systems cost much less and offer greater loiter times than their manned counterparts — making them ideal for many of today's tasks."

Well, Mr. Secretary, one way to convince the Navy might be to order, say, an Air Force Predator onto a ship...with some Hellfire missiles and send the ship and the Air Force guys pirate hunting...

More on the MQ-Reaper UAV here.

Hey, just park the van on the deck of an LHA and go to war with pirates... Long linger time, high altitude view of the Gulf of Aden. Add a couple of go fast boats to add to the fun...

UPDATE: This site says the takeoff distance required by the Predator is 430 meters. I'll be that can be improved...for shipboard use. Or, strap under a helicopter, lift it up in the air and launch! An MH-60s could handle that job...

UPDATE2: And, it's not like we haven't tried it before. Photo caption: 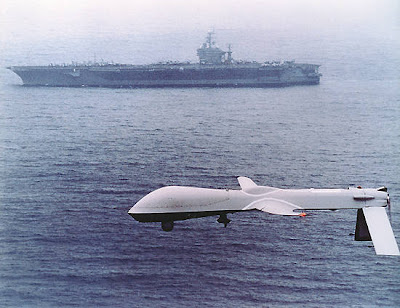 Though it appears that the Predator was not launched from the carrier. 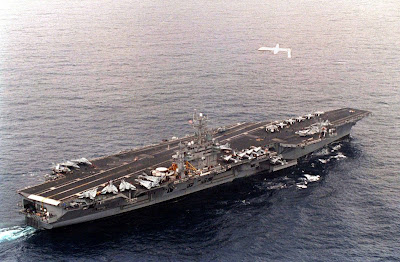 A Predator Unmanned Aerial Vehicle (UAV) flies above the aircraft carrier USS Carl Vinson (CVN-70) on a simulated Navy aerial reconnaissance flight off the coast of southern California on Dec. 5, 1995. The Predator provides near, real-time infrared and color video to intelligence analysts and controllers on the ground and the ship. This was the Predator's first maritime mission with a carrier battle group. The UAV was launched from San Nicholas Island off the coast of southern California. DoD photo by Petty Officer 3rd Class Jeffrey S. Viano, U.S. Navy (# 951205-N-3149J-004).