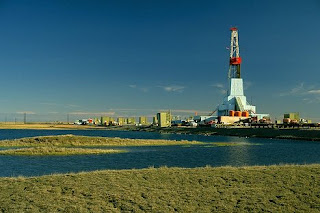 From FactCheck.org: What kind of tax breaks does the U.S. give to oil companies and to corporations that send jobs overseas?:

Both leading Democratic candidates have referred to tax breaks to oil companies:

Clinton, July 23, 2007: First of all, I have proposed a strategic energy fund that I would fund by taking away the tax break for the oil companies, which have gotten much greater under Bush and Cheney.

Obama, June 22, 2007: In the face of furious lobbying, Congress brushed aside incentives for the production of more renewable fuels in favor of more tax breaks for the oil and gas companies.

Both candidates are referring to H.R. 6, the 2005 energy bill that contained $14.3 billion in subsidies for energy companies. However, as we’ve reported numerous times, a vast majority of those subsidies (all but $2.8 billion) were for nuclear power, energy-efficient cars and buildings, and renewable fuels research. In addition, according to the nonpartisan Congressional Research Service, the tax changes in the 2005 energy bill produced a net tax increase for the oil and gas companies, as we’ve reported time and time and time again. They did get some breaks, but they had more taken away.