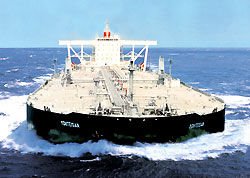 Austin Bay has some words on 21st century pirates over at Strategy Page and offers up this:

The spike in media interest may give Jack Gottschalk and Brian Flanagan a belated bestseller. Their "Jolly Roger With an Uzi: The Rise and Threat of Modern Piracy," published by the Naval Institute Press in 2000, documented the rise of "new piracy," to include smuggling and maritime scams, as well as terrorists operating at sea.

Gottschalk and Flanagan identify three "requirements" for piracy, which apply to Viking pirate raiders as well as contemporary Somali sea thieves: 1) Pirates prowl waterways where the targets are lucrative. 2) "The geographic area where pirates prey must be one in which the risk level of detection is acceptable." 3) If possible, pirates have "safe havens" where they can "hide, seek repairs and obtain supplies."

The increasing cooperation among the litoral states of the Strait of Malacca are changing those conditions in the Strait. Whereas before the pirates could rely on international law to stop pursuit at their home country's territorial waters, joint patrols allow for hot pursuit across borders. For background on the territorial waters issue, see this post.

Somalia, of course, is a different matter. The distinction with the Barbary pirates is that those pirates were virtually state-sponsored. As Max Boot puts it in The Savage Wars of Peace,

To finance their governments they would routinely declare war on a European state and set either naval vessels or privateers to seize enemy shipping.

The Somali pirates certainly have no state backing and by capturing ships carrying food for their fellow Somalis are not acting in the best interests of anyone save themselves.

Colonel Bay also discusses concerns expressed about a large vessel being captured in the Malacca Strait. We've mentioned this before. For info on an attempted attack on a large tanker and some possible ramifications, see here (looks as if Blogger may somehow have eaten the comments, which is a shame as there were some good ones...). And see here and here. On "Asymmetric Warfare: Terrorists, Small Boats, Explosives and Unarmed, Unescorted Ships" see here. And an amendment to the law of the sea that may help here. 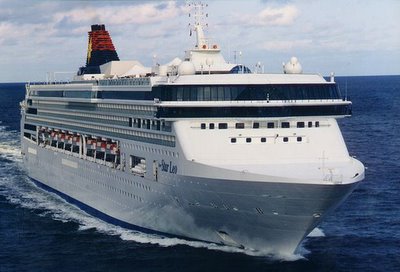 But the captain of the SuperStar Leo, one of the fastest liners afloat, was confident in his ship's ability to "repel boarders" in this pirate hotspot.

For a start, he had 14 tough-as-teak Gurkhas on board who acted as ship's security. These ex-British Army fighters, among the most feared troops in the world, have become security-for-hire on many passenger ships.

Then the captain produced a portable control console, with toggles remarkably similar to a child's electronic game, to demonstrate the operation of the four water cannons attached to the ship's side.

If anyone was silly enough to try to board, we were told, the force of the water was enough to splinter a timber vessel.

Looking down the towering, sheer sides of the ship to the sea, where white water surged violently as it was tossed aside, it was hard to imagine any small boat surviving alongside, let alone a man being able to attach a grappling hook and climb to the deck...
...In a new book, Cruise Touring, to be released in February, Professor Ross Dowling, head of the tourism faculty at Western Australia's Edith Cowan University, lists measures undertaken by cruise companies to maintain security.

These include Automated Personnel Assisted Screening (A-Pass), which identifies and monitors the movements of passengers and crew on board; the use of anti-piracy screens along lower decks; lighting; radar to reveal small, approaching craft; high-pressure water hoses; and discreet emergency alarms to alert maritime authorities.