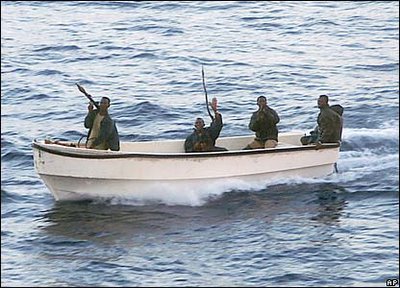 Your friendly neighborhood pirates out for a boat ride
Photo from here and was taken by a passenger on the cruise ship Seabourn Spirit.
Latest Piracy Report from ICC Commercial Crime Services here. Highlights:

ALERT
Somalia - NE and Eastern Coast
Twenty eight incidents have been reported since 15.03.05. Heavily armed pirates are now attacking ships further away from the coast. Ships not making scheduled calls at Somali ports are advised to keep at least 200 nm from the Somali coast.

-06.11.2005 at 0648 UTC in position 02:29.3N - 048:28.2E, east coast of Somalia. Pirates armed with rocket launchers and machineguns fired upon a RORO ship underway. Master took evasive manoeuvres and increased speed to maximum. Pirates’ boats fell behind and ceased firing. Bridge windows were damaged due to gunfire.

- 05.11.2005 at 1200 UTC in position 04:26.3N - 054:14.6E, off east coast Somalia. A bulk carrier underway spotted a craft drifting 16nm away. When ship came close the craft suddenly increased speed and chased the bulk carrier. Master took evasive manoeuvres, increased speed and moved away from the coast. Craft continued the chase until 1400 UTC before moving away. Craft had one derrick and master suspects this may be a mother ship to launch speedboats who attack ships.

- 05.11.2005, around 0225 UTC, in position 02:59N - 048:01E, 70 nm from east coast of Somalia. Six heavily armed pirates in two boats chased cruise ship, Seabourn Spirit underway. They fired with rocket launchers and machine guns causing damage to ship’s side. Master took evasive manoeuvres and sailed away from the coast. Pirates aborted the attempt and fled. One crew sustained injuries to his hand.

STAY AWAY FROM SOMALIA!!!!

UPDATE: You might note that the pirates are not masked or dressed in commando-style gear, which lends strength to the argument that the attack on the cruise ship was an act of piracy and not terrorism. In either event, these guys are operating as enemies of the world and need to be stopped.
Posted by Mark Tempest at 11/08/2005 07:06:00 AM