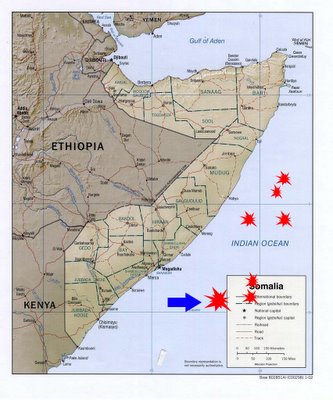 I've plotted the approximate locations of the last seven attacks by Somali pirates for which I have information (yes, they are very approximate). The blue arrow points to the area where the cruise ship Seabourn Spirit was attacked.

Although it has been seen as a strategic error, last week's failed attack on the Seabourn Spirit has done nothing to dilute the pirates' ambition. Four more ships were targeted by invaders in the three days that followed. "One of those attacks succeeded," Capt Mukundan added. "The ship was only carrying sugar but the owners paid out a substantial sum."

If anything, the criminals are becoming increasingly ambitious. Although any coastline further than 12 miles offshore can be considered international waters, pirates are now using so-called "Mother Ships" to venture far beyond the 100 and 150-mile zones deemed "safe" by maritime authorities. "A speedboat can only go so far before it runs out of fuel," said Capt Mukundan. "They are using bigger ships as a staging post to conduct their operations and we think this is giving them a range of up to 390 miles offshore. The money they have gained from past ransoms will have allowed them to buy impressive boats."

But last week's attack on the 10,000-ton Seabourn Spirit has exposed pirates' limitations, according to maritime security experts. Gavin Simmonds, a defence adviser at the Chamber of British Shipping, said: "They usually go for slow-moving vessels that they can capture quickly but they made a mistake by attacking such a highly-equipped ship.

"For a start, the Seabourn Spirit was so big there was no conceivable way the pirates could have got onboard unless the crew had thrown a rope down to them. They have probably also given away vital clues about their operation. If the US intelligence services are looking at this part of the coast they are likely to have tracked the boat through its satellite systems and be some way towards identifying who is responsible."

The International Chamber of Commerce, meanwhile, has appealed for more naval protection in the area. Although the British frigate HMS Campbeltown is in the Gulf, the Royal Navy is reluctant to commit it to Somali waters. An MoD spokesman said: "We are aware of the piracy issues that have been raised since the Seabourn Spirit was attacked but we have to take a long term view on our resources. Our ships already have vital tasks to perform. We will not tolerate piracy anywhere but it would take longer than a week to make such a strategic decision."

Germany, however, has decided to help. Its navy will be keeping the nation's leading cruise ship, MS Deutschland, under observation using ship and aircraft-borne radar and spy-satellites to protect the vessel and its crew. The navy also has a frigate on station near the Horn of Africa, with 220 German marines based in Djibouti as part of a Nato anti-terror mission.

Hans-Ulrich Kossel, a spokesman for the ship's owners, Deilmann Shipping Company, said: "It doesn't mean that we shall be shadowed by a frigate for the whole duration of the voyage. But it does mean that the navy will be observing us by radar."

But the anarchy that persists in Somalia means that the rebels are unlikely to notice or care. The waters offer them easy prey.

Simmonds said: "The pirates are increasingly behaving like paramilitary units, while the government is totally unable to stop them. More and more of these groups are getting their hands on the AK47s and RPGs that are easily purchased in Mogadishu. The pirates may not have taken over the country, but they have taken over the sea."

You can bet that if the shipping lanes involved were more vital to their national interests, the more powerful sea going nations would be cleaning out these pirate nests.
Posted by Mark Tempest at 11/12/2005 03:07:00 PM