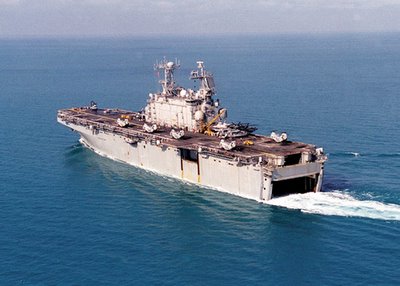 MSO are part of ESG-1’s regularly scheduled deployment to the U.S. 5th Fleet area of operations. The ships, currently assigned to Task Force 150, led by French Vice Adm. Jacques Mazars, seek to preserve the free and secure use of the world’s oceans by legitimate mariners and prevent terrorists from attempting to use the maritime environment as a venue for attack or as a medium to transport personnel, weapons or other illicit material.

“The focus is on gathering information that links to the global war on terrorism,” said Australian navy Lt. Cmdr. Darren Rushworth, future operations planner for Amphibious Squadron (CPR) 1, the task group commander. “The illegal smuggling means that funds are being created. Where does that money go? That is the link. There is also a link in terms of people smuggling, and we can find out where they are going and what they are doing."