The Atomic Cannon: Musta seemed like good idea at the time

Ever have one of those ideas that seemed right at the time, but later left you thinking, "What was I thinking?" Sometimes it's the whiskey or beer that makes those sorts of thought as attractive as all the girls are at closing time, sometimes it's just getting caught up in the moment. And sometimes it's th "Six Million Dollar Man" syndrome - "We can make it better..." To my way of thinking, one such overdone technical innovation was the Army's "Atomic Cannon." 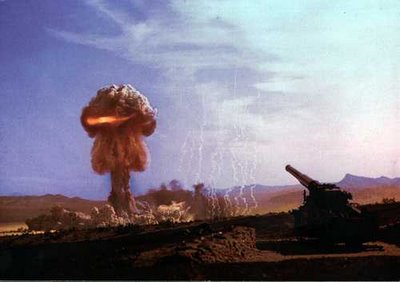 The Atomic Cannon, at 280 mm, was the largest nuclear capable mobile artillery piece manufactured by the United States. On May 25, 1953, a 280 mm cannon fired an atomic projectile a distance of 7 miles at the Nevada Test Site. Twenty 280 mm cannons were manufactured. None were used in battle.

The "Atomic Cannon", the Army's largest artillery gun, was capable of firing both conventional and atomic warheads. This 47 ton gun (aka "Atomic Annie") was transported by two tractors. The drivers of the vehicles communicated with each other by means of a built-in telephone system. It proved to be a highly mobile weapons system and adaptable to most road conditions. It fired a 550 pound projectile and had an approximate range of 20 miles. Six years after the development of strategic atomic weapons, this road-transportable cannon gave a tactical atomic capability to US land forces.

Based on the design of the 280mm (about 11") German K5 Railroad Gun, the M65 was transported between detachable front and rear transport tractors. The Japanese had made a strong impression when they employed 280mm howitzers against Port-Arthur during their war against Russia in 1904-5. The French and the Russians collaborated afterwards to develop a similar weapon.

Picatinny Arsenal received the mission to develop an artillery shell able to carry nuclear payload in 1949. Basically, this meant scaling a 240mm shell, the Army largest field artillery shell in World War II, up to 280mm. The project’s entire design team was Robert Schwartz, who completed his preliminary sketches during a period of 15 days spent alone in a locked room at the Pentagon. He sharpened the details in another locked room at Picatinny. The Chief of Staff of the Army at the time, General J. Lawton Collins, thought enough of Schwartz’s effort to cite him in his memoirs over a quarter of a century later.

The next problem was to sell the product to the Pentagon. This would not have happened if Samuel Feltman, chief of the Ballistics Section of the Ordnance Department’s Research and Development Division, had not pushed the project to approval. This goes along way to explain why Picatinny has a research building named after Feltman. Then, Schwartz had to rush to procure equipment and assemble a staff to carry out the three-year development effort...
...A single test shot was fired seven miles at the Nevada Test site at 8:30am, local time, on May 25, 1953. A 15-kiloton test fired from a 280-mm cannon at the Nevada Proving Grounds. Conducted at Frenchman's Flat, Nevada, the Atomic Cannon test was history's first atomic artillery shell fired from the Army's new 280-mm artillery gun. Operation Upshot-Knothole consisted of 11 atmospheric detonations, took place at the Nevada Test Site in 1953. There were three airdrops, seven tower shots and one warhead fired from an atomic cannon...
...The first atomic cannon went into service in 1952, and was deactivated in 1963. Throughout the 1950s, the Army deployed nuclear cannons to Europe even though they were obsolete as soon as they arrived. Guarded by infantry platoons, these guns were hauled around the forests on trucks to keep the Soviets from guessing their location. Weighing 83 tons, the cannon could not be airlifted and took two tractors to move its road-bound bulk. It was a glamorous weapon to be sure, but it did not fit into the Pentomic structure of the Army, and it siphoned off precious funding that the Army desperately needed for modernization. 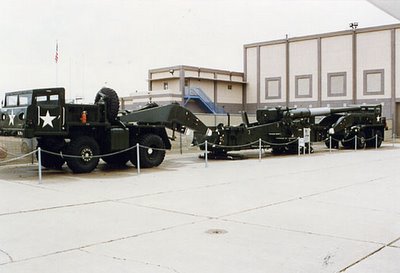 Photos of adventures in transporting this thing here

For some movies of one of these things in operation, go here and click on the movie links.

As the US Army Ordnance Museum says: