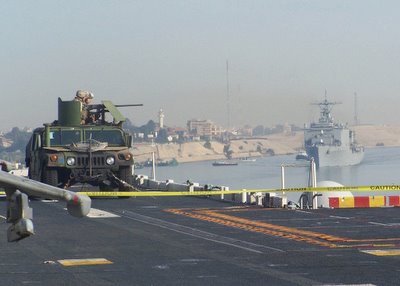 ESG-8 will fully support MSO while operating in the 5th Fleet AOO...
...ESG-8 includes 6,000 Sailors and Marines aboard six ships. In addition to Nassau, the strike group includes the guided-missile cruiser USS Cape St. George (CG 71), the amphibious transport dock USS Austin (LPD 4), the dock landing ship USS Carter Hall (LSD 50), the guided-missile destroyer USS Winston Churchill (DDG 81) and the attack submarine USS Norfolk (SSN 714). The 22nd MEU(SOC), embarked aboard the ships, is composed of its command element, 1st Battalion, 2nd Marines; Marine Medium Helicopter Squadron 261 (Reinforced), and the MEU Service Support Group 22...
...MSO set the conditions for security and stability in the maritime environment as well as complement the counter-terrorism and security efforts of regional nations. MSO deny international terrorists use of the maritime environment as a venue for attack or to transport personnel, weapons, or other material.