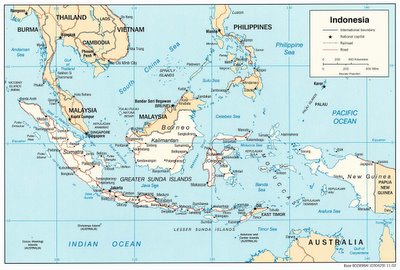 Indonesia's efforts to boost naval and air patrols in the notorious Malacca Strait helped suppress piracy there this year, but any let-up will see the attacks quickly resume, a top official has warned.

Pottengal Mukundan, London-based director of the International Maritime Bureau (IMB), said there was a dramatic reduction in attacks on ships in the strategic waterway this year.

"We believe (the reduction in the second half of 2005) is attributed to an increase in patrols by Indonesia on its side of the strait," he said in an interview with AFP in Kuala Lumpur.

As a result, there was a sharp drop in attacks to 10 in the first nine months of 2005 from 25 in the same period in 2004, in the narrow strait which is bordered by Indonesia, Malaysia and Singapore.The figures for the first few months of 2005 were also affected by last year's Dec. 26 Indian Ocean tsunami, which devastated parts of Indonesia and also curtailed pirates' activities.

Mukundan praised Indonesia for its efforts to police the waterway which is used by some 50,000 ships a year carrying one third of world trade, saying there was a direct link between law enforcement and the rate of attacks.

"It's always the case that when it goes off the agenda and people take their eye off this particular ball, the problem re-emerges," he said.

"We hope the level of patrols will remain so that the number of attacks will remain low. Otherwise, they will rise again."

"Indonesian ports still have a very large number of attacks in proportion to world attacks. That continues to be a problem. But in the Malacca Strait it has come down," he said.

Pirate attacks worldwide dropped 18 percent in the first nine months of this year to 205 but Indonesian waters remained the most dangerous and accounted for nearly one third of the total.

Mukundan said that if attacks rise substantially in the Malacca Strait, underwriters may declare it a high-risk area.

This decrease in the number of pirate attacks is reflected in the latest Weekly ICC Commercial Crime Services Piracy Report, which lists only the following event in the Malacca Strait area:

Note that the ICC CCS uses a rather liberal interpretation of "piracy" that includes all reported incidents of robbery and theft that occur even at anchorages and ports so long as they involve shipping.
Posted by Mark Tempest at 11/30/2005 07:17:00 AM