For the latest ICC CCS weekly piracy report, go here. Of interest might be the continuing robberies and muggings of ship crews near the Iraqi oil terminals. They are, in the great scheme of things, relatively minor and preventable, one would think, by an active police patrol in those waters...

For the latest ONI World Wide Threat to Shipping report (for 23 November 2005), go here and click on the date. Highlights:

1. GREENPEACE RETAINS IMO MEMBERSHIP: The International Maritime Organization (IMO) Council announced 18 Nov that
environmental activist organization Greenpeace would be allowed to
retain its consultative status. The campaign by some member
states to eject Greenpeace for actions in breach of maritime
safety rules resulted in a temporary suspension two years ago...(Eagle1 notes that the sort of thing that has some member states upset with Greenpeace is its flaunting of the rules of safe navigation as set out in the following)
...
GREENPEACE-POLAND-GENETICALLY MODIFIED GRAIN: Croatian
flag bulk carrier (HOPE) was surrounded by several Greenpeace
inflatables while attempting to enter Gdynia port, according to 21
Nov report. Several of the boats chained themselves to the ship’s
anchor chain and prevented it from entering port with its cargo of
genetically modified grain. ONI Comment: The, the first recent
Greenpeace maritime operation, also represents a rare incident of
action in the normally quiet Autumn-Winter season when Greenpeace
ships are usually in winter layup and refit (LM, ONI).

I wonder if another transnational organization that interfered with shipping in such a manner would simply be labeled as "terrorist"and dealt with in a rougher manner than having its membership in the IMO threatened? 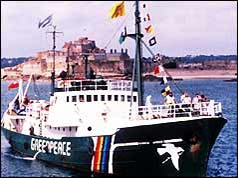 A timely reminder of an assault on a Greenpeace ship here. Of course, the French tried to shift the blame...

Soon after the bombing in July 1985, French media reported the theory that Britain's foreign intelligence MI6 agency had sunk the Rainbow Warrior as the environmental group was protesting France's nuclear testing in the South Pacific, The Times of London reported...

...The scandal rocked then French President Francois Mitterand's government, which for more than two months denied responsibility for the act of state terrorism.

State terrorism? I don't always (well, hardly ever) agree with the French, but I'm not sure that protecting your national interests from outside interference is an act of "terrorism," especially as it appears the idea was to prevent people from getting more seriously hurt.

Some history of the Rainbow Warrior sinking here and the Greenpeace version here. More here.
Posted by Mark Tempest at 11/28/2005 11:37:00 AM