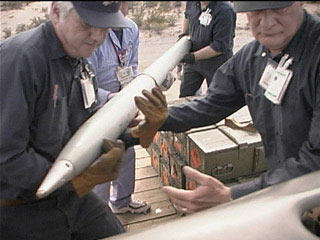 Details of the failed rocket attack on US war ships in Jordan earlier this year are contained in this Early Warning by William M. Arkin:

Jordanian authorities determined, according to U.S. intelligence reports, that three Iraqis entered Jordan on or about Aug. 6 from Iraq, linking up with a Syrian national already present in the country. The three Iraqis drove a seemingly standard oil tanker truck (Iraq, even under Saddam Hussein, provided Jordan with much of its oil) into the country; investigators later discovered that the fuel tank had been modified to accommodate at least seven Katyusha rockets, the standard in the Iraqi (and Syrian) armies.

Seems like a lot of trouble to go to for an unguided rocket system that is notorious for its inaccuracy. I also doubt that the Katyusha is the "standard" of any modern military. The fact that Zarqawi claimed credit for such a feeble attack (and for the recent suicide bombings of a wedding) does not seem to me to indicate that he is operating out of a position of strength.
Posted by Mark Tempest at 11/17/2005 05:44:00 PM