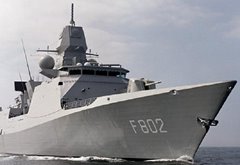 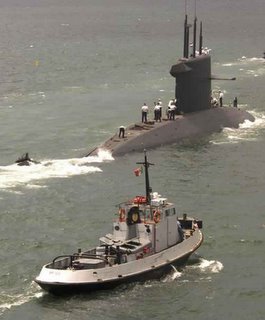 In the coming months, the Netherlands is to play a prominent role in protecting the seas around the Arabian Peninsula. On Monday 21 November, two navy ships left the harbour in Den Helder to participate in the maritime element of Operation Enduring Freedom, the US-led coalition against al-Qaeda and affiliated terrorist networks.

Flagship, supply ship, submarine
The two ships currently on their way to the peninsula are the new flagship of the Dutch fleet, ‘The Seven Provinces’ and supply ship ‘The Rotterdam’. A submarine - ‘The Porpoise’ - had already set off earlier in the direction of the peninsula.

Onboard ‘The Seven Provinces’ is Commander Hank Ort. In the coming months, he will be in charge of all non-US ships patrolling the Arabian Peninsula and the Indian Ocean; this naval unit is known as Combined Task Force 150 (CTF 150). The ultimate aim of the operation, says Commander Ort, is “to arrive at a safe and stable situation where international terrorism has been eliminated.”
...The main task of CTF 150 is protecting shipping lanes and intercepting suspect boats in an enormous area of operations: from the Suez Canal right across to the Straits of Hormuz and the Indian Ocean. “That’s around 2.5 million nautical miles square on the coastline,” says the Dutch commanding officer. CTF 150 consists of around seven to ten ships, “But, in the period February to March, that could increase to a unit of around 15. There are, in total, around 3000 men and women under my command,” he says.