A cruise ship sailing off Somalia has beaten back gunmen in speedboats who opened fire on it in an apparent pirate attack which terrified passengers.
At least two boats closed in on the Seabourn Spirit, reportedly firing automatic weapons and a rocket-propelled grenade.

One crew member was lightly injured in the early-morning incident in waters notorious for pirate attacks. 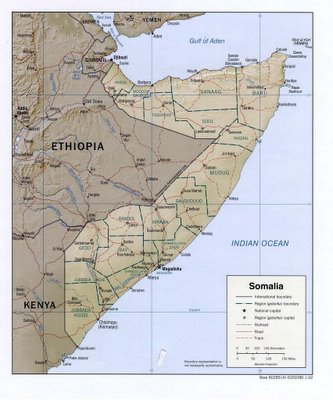 The ship was hit by bullets but not, apparently, by the rocket-propelled grenade.

It used an on-board loud acoustic bang to deter the gunmen.

A scheduled stop in Mombasa, in neighbouring Kenya, has been cancelled and the cruise, which began in the Egyptian port of Alexandria is now due to end in the Seychelles on Monday.

It is carrying 302 passengers and crew, most of them are believed to be Americans as well as some Britons.

A company spokesman said "...the company had no reason to believe it was a terrorist attack and all the evidence pointed to pirates."

When you attack a ship with 300 passengers you are treading a very thin line between piracy and terrorism. The attack occured about 100 miles off the Somali coast.

Seabourn Spirit info here. Reportedly the company is deciding whether to sail more ships into Somali waters. Let me make a suggestion: STAY AWAY FROM SOMALIA!!!

I would also suggest that the shipping lines might want to look into some convoys and armed escorts while transiting these waters.
UPDATE: The majority of the passengers are, apparently, Americans, with a smattering of Brits. What a prize they would be!
UPDATE: "Most of the passengers were believed to be Australian, American and Canadian." according to this report.
UPDATE: Passenger accounts: here:

Canadians were onboard the vessel. Among them was Mike Rogers of British Columbia.

Rogers told a Vancouver radio station that the captain tried to run one of the boats over. He said each speedboat had about four or five people on it.

"He (the captain) said he was going to do anything to stop them from getting on board."

Solicitor Norman Fisher, 55, from Hampstead Garden Suburb in north London was onboard the Seabourn Spirit 100 miles off Somalia in Africa when the attack from small boats took place.

The first many bleary-eyed passengers knew of the dawn raid was when captain Sven Erik Pedersen came on the PA system and said: "Stay inside, we`re under attack."

Terrified passengers, including 18 from Britain, were told to go to the restaurant as the sound of the grenade and gunfire from two 25ft rigid inflatable boats filled the air.

"I was awake doing some work when I heard what sounded like a crack from outside at 5.50am," said Mr Fisher.

"I looked out of the window and saw a small boat with about five people in it about 20 yards away.

"One of them clearly had a rifle. Later I realised that two of them had rifles and one had some kind of rocket launcher.

"They were firing the rifle and then fired the rocket launcher twice. One of the rockets certainly hit the ship - it went through the side of the liner into a passenger`s suite. The couple were in there at the time so it was a bit of an unpleasant experience.

"Fortunately they weren`t hurt but you can just imagine what it would have been like if they had been standing up because obviously the cabin was very badly damaged.

"I only saw one boat, although the captain said there were two. At first I didn`t know what was going on, but when I saw the rocket launcher I started getting a bit scared."

Mr Fisher went on: "I suppose I had a little bit of adrenaline, particularly because I was trying to take photographs.

"Afterwards, particularly when I looked at the photos and realised the guy was loading the rocket launcher right in front of me, which I hadn`t seen with the naked eye, then you do feel a certain amount of tension about what might have happened."

Mr Fisher said the captain tried to ram one of the boats in an attempt to capsize it and stop them getting aboard.

"The captain didn`t sound the usual alarm because he was worried that people would run up on the deck thinking it was a fire, and that would be the worst place to be," Mr Fisher explained.

UPDATE: Might as well tie in the last US Office of Naval Intelligence World Wide Threat to Shipping report (to 2 November 2005) (go and click on the date). Highlights:

1. HIJACKINGS OFF THE COAST OF SOMALIA CONTINUE: Two more
at sea merchant vessel hijackings on 18 and 20 October off the east
coast of Somalia demonstrate pirate’s ability to conduct at sea
hijackings from as far south as Kismayo (02 deg South lat) to as
far north as Eyl (08 deg North lat) and out to a distance of 170 NM.
All vessels are advised to remain at least 200 NM from the east
coast of Somalia. All merchant vessels transiting the coast of
Somalia, no matter how far offshore, should increase anti-piracy
precautions and maintain a heightened state of vigilance. Pirates
are reported to have used previously hijacked ships as bases for
further attacks. Another reported pirate tactic has been to issue
a false distress call to lure a ship close inshore. Therefore,
caution should be taken when responding to distress calls keeping
in mind it may be a tactic to lure a vessel into a trap.
Victimized vessels report two to three 6 to 9 meter speedboats
with 3 to 6 armed men per vessel armed with AK-47s and shoulder
launched rockets, opening fire on their vessels in broad daylight
in order to intimidate them into stopping. To date, vessels that
increase speed and take evasive maneuvers avoid boarding while
those that slow down are boarded, taken to the Somali coastline,
and released after successful ransom payment, often after
protracted negotiations of as much as 11 weeks...
...3. INDIAN OCEAN: An unidentified tanker was approached 26
Oct at 1810 local time while underway in position 06:09N 053:45E,
approximately 250 NM off the east coast of Somalia. Five
speedboats reportedly flashed lights at the vessel and gave chase.
One boat increased speed and came close on port beam. Crew
switched on deck lights and ship moved further away from the Somali
coast and boat gave up chase. ONI Comment: While this type of
approach at this distance from shore is usually associated with
fishermen protecting deployed gear, the increasing number of
hijackings at greater distances off the Somali coastline requires
taking the evasive actions demonstrated by the alert crew necessary
at all distances off the Somali coastline ...
...1. INDONESIA: An unidentified chemical tanker was fired
upon 27 Oct at 0836 local time while underway in position
08:41.565S 115:43.911E, Lombok strait. Pirates, armed with
guns, fired upon the vessel from a speedboat. The bridge window
was destroyed by gunshots. No injuries to crew. Several fishing
boats were in the vicinity

It's a dangerous world out there, and care must be taken.

UPDATE: Reports indicate the attacking boats were 25 foot inflatables. I wonder if there is a larger "mother ship" dhow or or other larger ship taking these inflatables further off the coast then they could reach on their own?