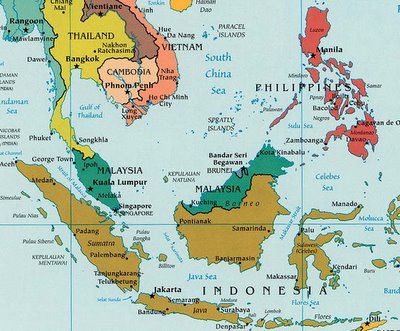 With regional cooperation, piracy and terrorism (sea-going and otherwise) is bumping into a new zone defense as reported here:

The Philippines, Indonesia and Malaysia have begun discussions to establish a line of defense against terror groups and sea pirates along their common sea borders in Southeast Asia.

Defense officials of the three countries sought to launch the line of defense, dubbed "Coast Watch South," at the soonest possible time to deter piracy and restrict the movement of Jemaah Islamiyah (JI) militants along the countries’ common sealanes.

The defense program will be established around the vast expanse of the Sulu-Sulawesi seas to protect borders and check on all sea transport passing through the common sealanes of the three countries, Defense Secretary Avelino Cruz Jr. said.

Cruz explained to President Arroyo the initial defense agreement among the three countries during a courtesy call made by the officials at Malacañang last Thursday.

Although the "Coast Watch South" will strengthen and enhance the anti-terrorism campaign in the region, Cruz said it is not an indication of any imminent large-scale terrorist attacks in the Philippines similar to the recent bombings in Bali, Indonesia.