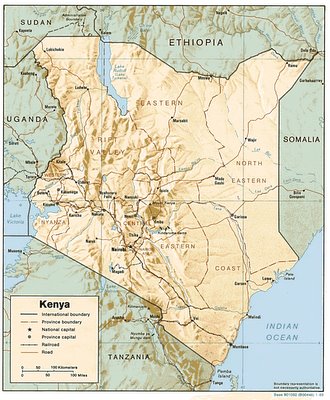 Kenya's port regulator said on Thursday the rise in piracy cases off the coast of Somalia was increasing shipping costs by forcing boats to sail farther away from the coast to avoid attack...
...Kenya Ports Authority (KPA) said this had greatly increased voyage times and freight costs for ships coming into the east African nation's main port, Mombasa.
"For vessels which are coming into the port of Mombasa, to stay over 200 miles (320 km) from the coast of Somalia, it means that they also are going to spend more time at sea," said Twalib Khamis, harbour master and chief operating manager at KPA.
"That will have an impact on the freight rate of the cargo which is coming to Kenya," he told a news conference...
...The Indian Ocean port of Mombasa is a major shipment point for coffee and tea exports for Kenya -- two of the biggest foreign exchange earners.
It is also a key gateway for imports and exports to Uganda, Burundi, Rwanda, eastern Congo, southern Sudan and Ethiopia.

I would expect that Uganda, Burundi, Rwanda, eastern Congo, southern Sudan, and Ethiopia will experience a "ripple effect" of increasing costs.

Kenya is also experiencing a potential loss of business from cruise ships which are deciding to avoid the area. See here for Kenyan anti-pirate activity and concern.

It’s also believed that the pirates have maritime radios, so that they can listen in to ships in the area, and plan attacks based on where these ships are expected to be. Kenya, whose economy depends on cargo vessels moving north, past Somalia, is calling for an international task force to patrol the Somali coast, and clear out the pirates. The U.S., Germany and France already have warships north of Somalia, guarding the Djibouti coast and the Gulf of Aden.