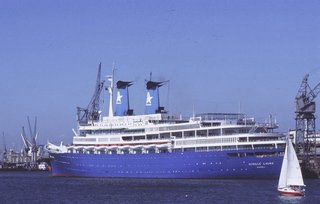 A little over 20 years ago, the cruise ship Achille Lauro was seized by Palestine Liberation Organization gunmen and an American named Leon Klinghoffer was killed during the capture.

The ship continued in service; she was reflagged in 1987 when the Lauro Line became StarLauro. On November 30, 1994, she caught fire off the coast of Somalia. Abandoned, the vessel sank on December 2.