The Malaysians are reacting to the capture of a could of their merchant ships by sending navy ships and pirate fighting troops to the Gulf of Aden, as reported here:

Malaysia has sent crack troops and navy ships to the Gulf of Aden after two of its vessels were seized by pirates last month, according to reports Wednesday. The comments by deputy premier Najib Razak come after the country's shipping giant MISC Berhad said Tuesday it had barred its vessels from the area, where two of its tankers were hijacked by armed pirates in August. The area has seen a spate of attacks in recent weeks, with eight ships taken by pirates since the end of July. "Our primary concern is the safety of our sailors," Najib was quoted as saying by the Star newspaper. Malaysia's armed forces chief said the military had sent two warships to the Gulf of Aden last Saturday to monitor the situation, the Star reported. Najib told the paper that negotiations between the pirates and representatives from MISC had not progressed much, with troops and naval vessels sent to protect another four of MISC's ships in the area. 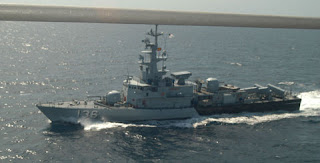 Ship: Royal Malaysian Navy (RMN) corvette Laksamana Muhammad Amin, though the actual units to be sent have not yet been revealed.
Posted by Mark Tempest at 9/03/2008 08:17:00 AM