Austin Bay: Counter-terror ops in the Horn of Africa (HOA)

Austin Bay at StrategyPage on the under-appreciated, under-reported HOA opshere.

"In 2005, Al-Qaida is very much in the Horn of Africa," a U.S. intelligence officer said during a background brief. "But we're there, too. CJTF-HOA supports a spectrum of counter-terror operations." 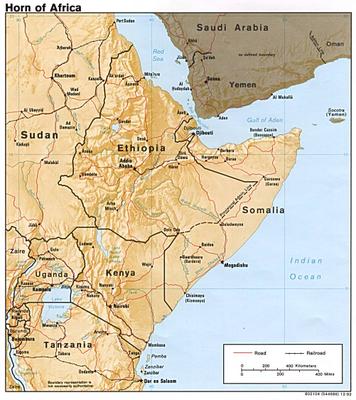 The intelligence officer emphasized the role Djibouti's seaport and airbase play in supporting coalition naval operations in the Red Sea and Indian Ocean. That force includes ships from German, Spanish and other allied navies. The ships and aircraft conduct "counter-terror surveillance operations" -- which means stopping and inspecting everything from rowboats to oil tankers.

Four years ago, terrorists tried to sink a French tanker as it passed through the Bab Al Mandab Strait between Yemen and Djibouti. The navies have also tackled the pirates that plague the area. Terrorists and criminals cooperate on land -- terrorist organizations with cash can also buy a pirate.

The spectrum of counter-terror operations in the Horn also includes developmental aid, medical support, and training for border troops and police forces -- what Huddleston meant when he said U.S. forces were "waging peace."

Poverty may not create international terrorists, but poverty, social turmoil, starvation, lack of infrastructure and weak political systems attract them. East Africa and the Horn suffer from all of these afflictions.