...devastated by the ravages and terror of human smuggling, drug smuggling, kidnapping, murder, destruction of property and the death of livestock. ...

"[It] is in an extreme state of disrepair and is inadequately funded or safeguarded to protect the lives and property of New Mexican citizens."

New Mexico shares 180 miles of border with the Mexican state of Chihuahua.

"The situation is out of hand," Richardson said Friday night on CNN's "Lou Dobbs Tonight," noting that one 54-mile stretch is particularly bad.

The Mexican government issued a statement in which it acknowledged the problems along the border, but said it continues to make consistent efforts to target them along with U.S. authorities.

It said some of Richardson's views stem from "generalizations that do not correspond to the spirit of cooperation and understanding that are required for dealing with problems of common concern along the border."

Richardson pledged an additional $1 million in assistance for the area, his office said in a news release.

I think Mayor Guiliani got it right in New York with his application of the "Broken Window Theory." This theory is described as :

The Broken Window Theory is a social theory that says that small problems are important and need attention; unheeded, they will lead to larger problems.

The original analysis dealt with urban decay. The theory postulates that urban decay starts with small damage that goes unrepaired (the broken window). If the damage is unrepaired for a long time, local residents see it and feel somewhat threatened and vulnerable. They begin to withdraw and will be less likely to intervene in neighborhood affairs. Troublemakers see the small decay and start to move in on the neighborhood. This frightens the residents into more reclusion. Ultimately crime increases and the neighborhood decays. (Kelling & Wilson, 1982)

Mayor Rudolph Guiliani used this theory to cut crime in New York City. By focusing on jay walking, graffiti, and other “small” crimes, he changed the culture of the city and major crimes dropped. (Leo, 2002)

In an interview published in the Post-Tribune, the creator of the theory explains the origin of the name: "We didn't pick the name 'Broken Windows' out of the sky," said the study's author, George Kelling. "It's a metaphor - if you've got broken windows, you've got to fix them pretty quickly. Otherwise, it's a sign nobody cares and a sign that leads to more discord as a broken window is left untended. It leads to more petty crime, then serious crime and, finally, urban decay. The theory behind it is that the small things matter - often more than big things." (Patterson, 2003)

It occurs to me that this theory is completely applicable to illegal immigration, drug smuggling and all the other activity that Gov. Richardson speaks of. By ignoring minor incursions, we now have a much larger and more complex issue to deal with. While I am not a fan of Governor Richardson, I do admire his effort to do something now on this problem. I can only hope the politicos in Washington will act cuanto antes to make sure we remain a country open to legimate immigrants and genuine guest workers who are willing to obey our laws. Law breakers and scofflaws deserve no special treatment. I cannot imagine that we can long continue to allow this particular "broken window" to remain unrepaired.

At the start of Worl War II, the US Army had patrols along border, often consisting of horse cavalry (predominately composed of African-American cavalrymen directly descended from the famed "Buffalo Soldiers"). My father was one of the officers assigned to those patrols. If it was important during WWII, it is equally important to secure our borders now during this new war. 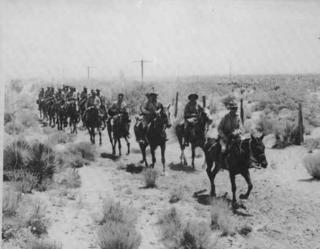 If it takes US troops to patrol our borders, let's get them there. Call me and others out of retirement if manpower is an issue. We can certainly patrol a border sector and talk on a radio, regardless of how otherwise decrepit we have become.

It is matter of national security. Let's get it done.

Update: Some history of the WWII cavalry border patrols here:

The surprise attack on Pearl Harbor triggered fears of assaults on the west coast and invasion threats from south of the border. A new emphasis was placed on the continent's western defenses and the division deployed its 3d Brigade to Arizona. General Coulter, the brigade commander, was also given command of the Southern Land Frontier Sector of the Western Defense Command. Under him the 2d Cavalry, stationed at Phoenix, and the 14th Cavalry at Tucson, patrolled the Mexican Border for the next seven months. Meanwhile the 4th Cavalry Brigade, still at Camp Funston, continuing an endless cycle of training. Constantly called on to provide cadre for new units, the 9th and 10th Cavalry routinely lost veteran personnel and received untrained recruits.

source Caption reads "The 28th Cavalry crosses an arroyo at Camp Lockett in Campo, California, just east of San Diego. The 28th trained and then served as boarder{sic} patrol from Camp Lockett before being shipped to North Africa in 1944."
Update3: John Fund of WSJ Opinion Journal makes the same point as commentor JRB below: Immigration control is being seized by some Democrats as an area in which the Republicans are vulnerable. So long as somebody addresses the issue, I couldn't care less who leads the way.
Update4: Not of a surprise that Michelle Malkin is all over this with many good links on the politics of border protection. I don't think she's in favor of an "open border" policy...
Posted by Mark Tempest at 8/14/2005 12:07:00 PM