What? "Stop the terrorism at the gas pumps"

Oh, stop, you're killing me with the satire- presented here: (added letter as an UPDATE )

When one thinks of a terrorist, the image that comes to mind is that of ruthless individuals or groups who seek to destroy by violence. However, there are other kinds of terrorists - those who are more docile in their methods, but effectively destroy an economy and a way of life from within. The silent terrorists are at work today throughout this nation, but much more noticeably here in Boyle County where we live. I refer to those in the petroleum industry.

It seems any flimsy excuse can be - and is - used to raise fuel costs to an unjustly exorbitant level without realistic justification. Some may blame the local retailers; some, the "jobbers;" and others, the large oil companies. Some may even go so far as to accuse government officials of being in the hip pocket of the oil companies. The bottom line is that Americans are paying far too much for fuel due to the greed of large corporations and those connected with them.

It now costs me more to fill my gas tank this week than it did yesterday, but that isn't where it stops. It will now cost more to ship the goods I purchase in the grocery, the pharmacy, the clothing stores, etc. And guess what? Those prices will soon go up as well. Those individuals with low or fixed incomes will feel the effects the most as usual, but we will all be victims of this greed.

It appears though that our government officials don't care about that. I recently heard a representative say there was nothing the government could do about oil prices. It is time for the American public to voice their objections in a lawful manner and tell our government officials to get off their fat billfolds and start representing the good of this country by putting a stop to this unjustified inflation of fuel costs. We the people have the power to make ourselves heard, and it is high time we used that power to the fullest.

And raising fuel prices on "any flimsy excuse"--just too much.

Tossing in the line about the "the greed of large corporations and those connected with them" --priceless (no pun intended).

Wait - I think it's supposed to be a serious letter to the editor. Sorry.

Update2: From the American Petroleum Institute (yes, there might be some bias) , an interesting price increase comparison (click on the graph to make it bigger): 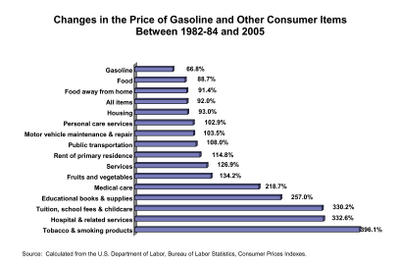 Wow, look at those price increases in the medical and education areas!

Update3: Just to complete the cycle:

Hey, you can even go here and compare notes. Can you determine exactly where the big price increases are in relation to inflation?

Looks to me like "Big Oil" has been saving you money relative to inflation for several years.