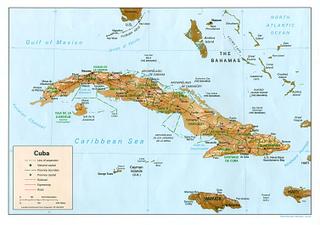 Cuba says US immigration policy is to blame for the continued deaths of people fleeing Cuba to seek a better life, including 31 who died recently as reported here.

It appears to the Cuban government is not the wretched living conditions of their island paradise that is driving people to acts of desperate escape, but rather the fact that the US has an open door policy for those who make the break successfully. "Do away with the welcome mat," the Cubans say, "and Cubans will have no incentive to try to get to the US."

The 31 deaths would make this the worst tragedy in years involving Cuban emigres who brave the crossing by the hundreds each year to leave Communist Cuba for the United States.
"We call on the U.S. authorities once again to put an end to the smuggling of people that is organized and financed from the United States," the Cuban statement said.
Havana blamed a U.S. law that grants Cuban emigres almost automatic residency if they make it ashore in the United States for encouraging the illegal emigration. It called the Cuban Adjustment Law a "killer."

Geez, it makes me want to say, "Give some freedom to your people, El Presidente, and they will have less incentive to flee." And the only "killer" is you.

UPDATE; They probably don't see them as they drift ashore from Cuba, but the words still must reach into Castro's homeland: 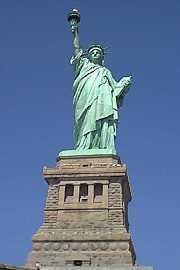 Not like the brazen giant of Greek fame,
With conquering limbs astride from land to land;
Here at our sea-washed, sunset gates shall stand
A mighty woman with a torch, whose flame
Is the imprisoned lightning, and her name
Mother of Exiles. From her beacon-hand
Glows world-wide welcome; her mild eyes command
The air-bridged harbor that twin cities frame.
"Keep ancient lands, your storied pomp!" cries she
With silent lips. "Give me your tired, your poor,
Your huddled masses yearning to breathe free,
The wretched refuse of your teeming shore.
Send these, the homeless, tempest-tost to me,
I lift my lamp beside the golden door!"