We've heard a lot about the "squeeze" being put on shippers by the proposed Malacca Strait "war rate" premium increase in ship insurance, here or here: 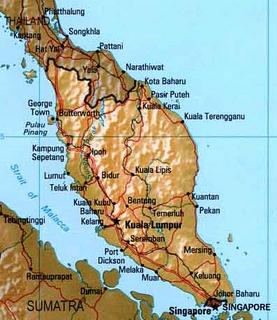 But the increased premiums have drawn considerable criticism in the past week from shipowners.
"Yes, there have been piracy attacks, but there is a big difference as far as we're concerned between a piracy attack and a terrorism attack," said John Fawcett-Ellis, general counsel and regional manager in Singapore for the International Association of Independent Tanker Owners, based in Oslo.

The have been other attempts to distinguish between simple piracy and terrorism. The reason is simple - it will cost shippers and ship owners and charterers more money if the premium rates go up- so they are trying to dismiss the level of risk. (UPDATE:(8/25/05) NY Times takes up the isue here.

But in addition to the shipper, charterers and ship owners, there's another group with an interest in ship security that I have failed to address. 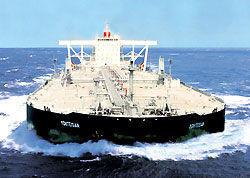 Reader Steve offered up a change in perspective on the Malacca Strait insurance rate kerfuffle in a recent email and pointed me to the web site of NUMAST. According to that site,

NUMAST is the acronym for the National Union of Marine, Aviation and Shipping Transport Officers...NUMAST is a trade union, representing shipmasters, officers, cadets and other staff serving in the UK and international fleets and ashore in maritime related industries.

With that background, consider the following from the NUMAST web site here:

The International Chamber of Shipping has tried to persuade the London insurance market’s Joint War Committee to reconsider its "war risk" rating for the Malacca Strait and, during this time, to refrain from imposing additional premiums in the area.

NUMAST general secretary Brian Orrell said the wrangling underlined the depressingly low esteem in which the owners hold their seafarers. "Behind all their semantics about the methodology of assessing the threat levels in such areas lies the stark reality that there is a 'clear and present danger' to seafarers and ships and that this will only be taken seriously if sufficient political and industrial will is generated.

"The fact that the Joint War Committee's decision focussed minds on the nature of risk has got to be welcomed and NUMAST hopes that it will lead to some suitably serious consideration of the ways in which those risks can be reduced, rather than sterile debate about the nature of the assessments," he said.

Steve also copied this letter to an editor (from an unknown publication):

Subject: War Risk in the Malacca Straits - From the SeaFarers Perspective

From Brian Orrell- Tuesday August 23 2005
Letter To The Editor

SIR, Your report 'Joint War Committee stands by Strait
ruling' (August 17) on the shipowners' failed attempts
to have the Malacca Strait reclassified as a 'war
risk' area underlines the depressingly low esteem in
which they hold their seafarers.

Behind all their semantics about the methodology of
assessing the threat levels in such areas lies the
stark reality that there is a 'clear and present
danger' to seafarers and ships and that this will only
be taken seriously if sufficient political and
industrial will is generated.

The fact that the Joint War Committee's decision has
focused minds on the nature of risk has to be welcomed
and Numast hopes it will lead to some suitably serious
consideration of the ways in which those risks can be
reduced, rather than sterile debate about the nature
of the assessments.

While the latest International Maritime Bureau figures
suggest there has been a decline in the number of
attacks on shipping in the first half of this year,
the same statistics show an increase in the number of
seafarers being taken hostage or kidnapped - 188 cases
this year compared with 139 in 2004.

The IMB has also noted that demands for ransom are
higher than ever before and that the lack of effective
law enforcement infrastructure can increase the risks
facing ships and their crews.

Numast, therefore, commends the move by the insurance
market to find a more sophisticated mechanism for
assessing threat levels and we support its stance that
the Malacca Strait's status as an area of high risk
should remain until there is evidence that anti-piracy
measures are being effective.

The case for a 'war risk premium' to be paid to
seafarers serving in these 'frontline' areas is surely
as strong as the case for an additional premium for
the ships upon which they live and work.

We see little merit in shipowners' attempts to
separate 'threat' assessment from 'vulnerability'
assessment, nor to remove the spectre of terrorism
from the equation.

The statistics clearly show very little distinction
between the types of vessels attacked and, as the
activities of the Aceh rebels in Indonesia showed, the
dividing lines between 'piracy' and 'terrorism' are
very thin.

Seafarers - who all too often pay the heavy price of
death, injury or theft of their own personal
belongings - are entitled to feel frustrated by the
debate over the Joint War Committee's actions.

It matters little to seafarers whether, as the owners
seek to argue, 'most incidents were confined to slow,
small coastal vessels' (and Numast questions whether
this is in fact true) - for the insidious effects of
these attacks affect everyone, from the resulting
additional workload in conducting anti-piracy watches
onboard to the ever-present stress generated by the
fear of attack or becoming the next hostage.

Mr. Orrell's comments about the "thin" line between terrorism and piracy parallel my own thoughts as set out in this earlier post.

I should note the NUMAST member will get more pay for sailing through "war risk" areas, so they, too, are not exactly working this issue with "clean hands."

But I appreciate the seafarer view. It's their lives on the line.