What the Army is doing for Katrina relief

The Army continues to grapple with the issues Katrina has wrought as set out here. It's a big list and wide-spread:

Access to breach sites continues to hamper efforts to close them, officials said. Barges and cranes cannot be moved through the Industrial Canal due to motor vessels and other large debris blocking the canal. Vessels must go around and through the Gulf Inner-Coastal Waterway or the Mississippi River Gulf Outlet.

The Mississippi River is closed to vessel traffic from Southwest Pass to Natchez, MS. The Army National Guard, U.S. Army, U.S. Coast Guard, other federal and state authorities, and private contractors are all working alongside the Corps to bring in necessary materials, supplies and equipment to begin making inroads to the damage.

The Corps is working with two major contractors to determine the scope of unwatering services available to inundated areas.

The Corps of Engineers Motor Vessel “Kirby Responder” is surveying the Gulf Inner-Coastal Waterway from Pascagoula, Miss., toward News Orleans with U.S. Coast Guard members on board to help determine what can be navigated.

The survey vessel LaFourche is currently surveying the condition of the navigation channel from Baton Rouge to Southwest Pass.

The Industrial Canal Lock is operating on an emergency generator and officials said the lock is expected to be operational in the near future. The canal is blocked with vessels, loose barges and boats. All other Corps of Engineers waterway facilities are open for normal operations.

The Port Allen Lock has been designated as a staging area for the Federal Emergency Management Agency. In support of FEMA, the U.S. Army Corps of Engineers is contracting for:

• emergency clearance of debris to enable reconnaissance and movement of emergency personnel and equipment.

• technical assistance and damage assessment, including structural inspection of structures

• unwatering to assist the state of Louisiana by performing and or contracting to remove water from New Orleans and the greater metropolitan area.

While the Corps is coordinating public works and engineering activities under FEMA, it will also provide direct assistance under Flood Control and Coastal Emergency authorities, officials said.

Aerial reconnaissance of the region has been conducted. Corps ground reconnaissance teams have observed that most houses have major damage to their roofs and officials said they expect roofing to be a huge mission. Communications also continues to be a major issue, they said.

Corps teams forward in the area have been unable to contact all parish emergency officials and determine pump station conditions. They are currently contacting Levee Boards to determine local capabilities for assistance in filling breeches, evaluating the extent of damage, etc., and are coordinating with the Louisiana Emergency Operations Center, officials reported.

The Corps has also maintained close communication with the U.S. Geological Service regarding water stage data in Louisiana. Gage data for Lake Pontchartrain indicates that the lake is slowly draining, officials said. Based on the present rate of fall observed for the last eight hours, they said the lake level should return to normal level in about 36 hours.

As recovery efforts continue to gather momentum, numerous U.S. Army Corps of Engineers personnel from across the nation are arriving in the region to help tackle the mission ahead.

Other military efforts in the area incude:

• U.S. Transportation Command is flying 8 swift water rescue teams from Calfornia to Lafayette, La. These California-based teams provide about 14 personnel with vehicles and small rigid hulled boats who are highly trained and capable of rescuing stranded citizens from flooded areas.

• The hospital ship, USNS Comfort, is departing Baltimore to bring its medical assistance to the Gulf region. The Comfort should reach the area in seven days, officials said.

• Three Army helicopters from III Corps at Fort Hood, Texas, are in Baton Rouge and two more in Mississippi to assist with search and rescue and damage assessment.

• USNORTHCOM established Joint Task Force Katrina to be the military’s on-scene commander in support of FEMA. Lt. Gen. Russel Honoré, commander of First Army at Fort Gillem, Ga., is the JTF commander. JTF-Katrina will be based out of Camp Shelby, Miss.

• U.S. Northern Command’s Joint Operations Center is on 24-hour duty in Colorado Springs, Colo., to facilitate any additional requests for assistance that may come from FEMA representatives.

Yes, it takes time. But it is getting done.

More than 11,000 Army and Air National Guard members and 7,200 active-duty troops, mostly Navy, are supporting hurricane relief operations along the Gulf Coast, and 10,000 more National Guard troops are expected to join the effort within the next 48 hours, Defense Department officials said today.
Army Lt. Gen. H Steven Blum, chief of the National Guard Bureau, told Pentagon reporters today the additional troops, who hail from 13 states outside the region, will be evenly divided between the hardest-hit states, Mississippi and Louisiana. There, he said, they will augment forces already on the ground helping law enforcement agencies with security and traffic control; transporting and distributing food, water and ice; conducting searches and rescues; providing generator support; and carrying out other missions to support life and property.

More National Guard engineers also will join the relief effort, helping clear roads of obstructions that block movement into and out of the affected areas, and transportation units will bring fleets of 5-ton trucks capable of maneuvering through heavy floodwaters to deliver desperately needed equipment and supplies. 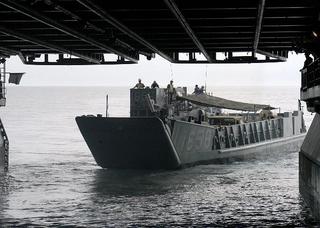 ulf of Mexico (Aug. 31, 2005) - A Landing Craft, Utility (LCU) assigned Assault Craft Unit Two (ACU-2), departs the well deck of the amphibious assault ship USS Bataan (LHD 5) bound for New Orleans. The LCU is loaded with sandbags, water, a small flat bottom boat, 300 lifejackets, a High Mobility Multipurpose Wheeled Vehicle (HMMWV) and enough supplies to last ten days as part of the relief efforts after Hurricane Katrina hit the Southern Gulf Coast States. Bataan's involvement in the humanitarian assistance operations is an effort led by the Department of Defense in conjunction with the Federal Emergency Management Agency. Bataan has been tasked to be the Maritime Disaster Relief Coordinator for the Navy's role in the relief efforts. U.S. Navy photo by Photographer's Mate Airman Pedro A. Rodriguez 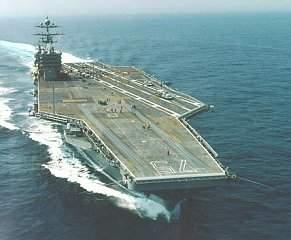 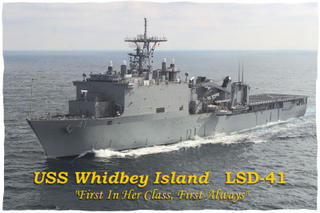 The Landing Craft Air Cushion (LCAC) is a high-speed, over-the-beach fully amphibious landing craft, capable of carrying a 60-75 ton payload. It is used to transport the weapons systems, equipment, cargo and personnel of the assault elements of the Marine Air-Ground Task Force from ship to shore and across the beach. LCAC can carry heavy payloads, such as an M-1 tank, at high speeds. The LCAC payload capability and speed combine to significantly increase the ability of the Marine Ground Element to reach the shore. Air cushion technology allows this vehicle to reach more than 70 percent of the world's coastline, while only about 15 percent of that coastline is accessible by conventional landing craft. (source)