In a silly and immature protest of some sort, the governing body of San Francisco rejects a plan to put the decommissioned battleship USS Iowa on display near Fishermans Wharf as reported here. The ship will go to Stockton, instead, which, not surprisingly, is happy to get it. The action of the Board appalled even Senator Diane Feinstein, as you will see in the following quote: 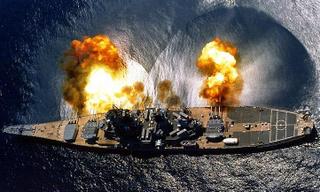 The USS Iowa joined in battles from World War II to Korea to the Persian Gulf. It carried President Franklin Roosevelt home from the Teheran conference of allied leaders, and four decades later, suffered one of the nation's most deadly military accidents.

Veterans groups and history buffs had hoped that tourists in San Francisco could walk the same teak decks where sailors dodged Japanese machine-gun fire and fired 16-inch guns that helped win battles across the South Pacific.

Instead, it appears that the retired battleship is headed about 80 miles inland, to Stockton, a gritty agricultural port town on the San Joaquin River and home of California's annual asparagus festival.

But city supervisors voted 8-3 last month to oppose taking in the ship, citing local opposition to the Iraq war and the military's stance on gays, among other things.

"If I was going to commit any kind of money in recognition of war, then it should be toward peace, given what our war is in Iraq right now," Supervisor Ross Mirkarimi said.

"This isn't the San Francisco that I've known and loved and grew up in and was born in," Feinstein said.

No, ma'am, it isn't. A lot of us have fond memories of the City by the Bay that used to be.

UPDATE: John at Arrgggh! seems a little sarcastic or something...

UPDATE2: USS Iowa vets looking for help to put the Iowa in San Francisco instead of Stockton here. Not that there's anything wrong with Stockton...
Posted by Mark Tempest at 8/20/2005 06:03:00 PM