After the Aqaba flap, naturally, attention might turn to Port Security here at home, as in this report from San Francisco here on a Port Security Unit. However, they don't seem to have communications problems well in hand, with as far as talking with other emergency responders or in discussing communications with the press... 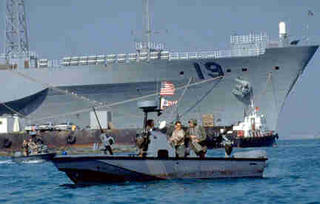 I worked with Port Security Units during Desert Storm (we in the MIUWU were the "eyes" and they were the "teeth") and those guys were great. I suspect this new crop is pretty darn good, too, and probably deserve a little more credit than this report gives them. 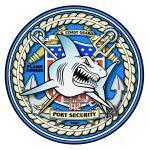 UPDATE (8/21/05): A little better article (subscription) regarding the new PSU and its mission:

Equipped with six high-speed, 25-foot boats armed with machine guns, Port Security Unit 312 is prepared to defend ships and harbors from a wide range of threats.

The unit is the first of its kind based in the Bay Area and the third on the West Coast. Its main mission is to defend overseas ports in support of U.S. military operations, such as in the Middle East.

"They're looking to do port security on the front lines," said Petty Officer Brian Leshak, a Coast Guard spokesman.

The unit's leader, Cmdr. Don Huenefeld, is one of about 140 reservists who constitute most of the unit, with six active-duty members making up the rest. The central Washington apple and hay farmer said the unit is prepared to ship out on short notice -- no more than four days -- and stay overseas with little help.

Tents, sleeping bags, cots, medical supplies, communications equipment, guns, cooking gear and almost everything else the unit needs are packed into metal shipping containers. Those and the boats are transported aboard military or chartered civilian aircraft.

"We're self-contained for 30 days," Huenefeld said. "All we need is fuel and water."

The unit can begin limited operations within a day of landing. However, currently it isn't scheduled to deploy. It also could be called on to secure a U.S. port, as others did in New York, Boston and Los Angeles after the Sept. 11, 2001, attacks.

"Port security units operate in everything from cold environments ... to the deserts of Iraq," said the unit's operations officer, Lt. Cmdr. Brett Linden.

It also isn't limited to operating on water. Members can patrol on land, too, to guard the unit or other potential targets.

(You should note that the unit is based at Coast Guard Island in San Francisco Bay on the Oakland side...and thereby may avoid the Iowa problem.)