Sea Fighter is the 'key to the future,' vice admiral says 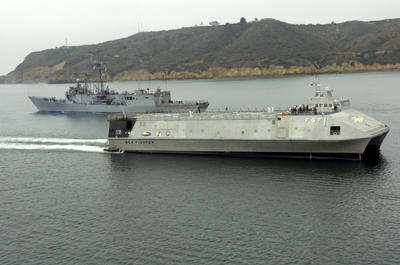 Commander Naval Surface Forces likes it. The price right. It goes fast and can be loaded with a lot of firepower. What's not to like? It defies "tradition" and the "blue water" Navy.
Reported here:

SAN DIEGO — Like a slender runner in a roomful of weightlifters, the Sea Fighter stands out among ever-bigger warships the Navy is building.

The aluminum catamaran — the fastest ship in the arsenal — could play a critical role in the war on terrorism, skimming shallow water in the fight against a smaller enemy attacking in swarms of motorboats.

Critics aren't convinced, believing that sea power is the domain of big ships in the middle of the ocean.

After the deadly terrorist attack on the destroyer USS Cole five years ago, the Navy accelerated efforts to strengthen its fighting ability in shallow water. The experimental Sea Fighter arrived this month in San Diego, where it will spend the next two years as a convertible test vessel for the new breed of fast, agile and relatively affordable ships.

The Sea Fighter, formerly known as the X-Craft, carries a Navy and Coast Guard crew of 26 and went from paper design to christening in less than two years. It carries a price tag of $79 million, compared with $4.5 billion spent on the new USS Reagan nuclear-powered aircraft carrier.

Resembling a commercial car ferry, the Sea Fighter stretches the length of a football field and can hold two helicopters on its deck. Its stern can launch and retrieve manned or unmanned mini-submarines and small boats, and it can be armed with hundreds of low-cost, "cruise-like" missiles capable of supporting U.S. troops hundreds of miles away.

In calm seas, it can exceed 50 knots, or 57 mph, and is capable of entering water as shallow as 12 feet.

Much of the design is new for the Navy. While a conventional warship bristles with sensors and weapons, the Sea Fighter is mostly empty space and weighs about 1,000 tons — one-tenth as much as the newest destroyer. The empty space allows it to be rapidly reconfigured after cranes hoist aboard 20-foot containers holding gear needed for each job — anti-submarine, mine detection, humanitarian missions.

Whether Sea Fighter itself eventually joins the fleet will depend on how well it fares during testing, said Rear Adm. Jay M. Cohen, head of the Office of Naval Research, which oversaw the ship's development.

"The challenge is to demonstrate the effectiveness of a concept like this," he said.

House Armed Services Committee Chairman Duncan Hunter, R-Calif., has championed the ship since the late 1990s and his wife christened it in February at a Washington state shipyard. Both the Sea Fighter and the missiles, called Affordable Weapons, are made by Titan Corp., a San Diego-based defense contractor. But Hunter is frustrated that many in the Navy don't like the idea of building more small ships like the Sea Fighter.

"They'll say 'OK, you got it built. It's not going to the fleet. It's going to be a nice experimental craft. Keep it out of the way. We'll keep building big ships,' " Hunter said.

Plans are that by 2035, the Navy will have as many as 82 smaller, agile ships — a quarter of the future fleet — at a potential cost of $32.7 billion, according to a Congressional Research Service report issued in May.

However, several U.S. government studies have criticized the effort. With many shipbuilding projects competing for the same pool of money, the studies question whether the smaller vessels are as urgently needed as the Navy claims, and just how vulnerable those ships would be to missiles or medium-caliber weapons.

Others have problems envisioning exactly where on the globe the smaller combat ships would be used.

"It's a Jim Dandy concept," said John Pike, who directs the defense and space Web site Globalsecurity.org. "I have just had some difficulty sitting down and pointing to it on the map."

He said a fleet of small ships is a marked change from the Navy's core belief.

"It goes against everything they have believed for more than a century," Pike said.

Dear Mr. Pike: Have you got any maps of the major straits (Malacca, Hormuz) or of any littoral areas (like those where the Iraqi oil terminals are- you know where we have some billion dollar cruisers floating around)? Let me know if you don't, 'cause I'll order you up a set.

Let's see the FSF costs $79 million or approximately 12 for $1 billion, The DDX may cost $3 billion. How many FSF's could I buy with that? Oh, yeah, about 36 give or take a volume discount.

UPDATE: Related? Well, sorta- Thomas Barnett ( The Pentagon's New Map)- has some fun with the Washington Puzzle Palace's changing guard and the insider "media" that covers them..."The neocons are leaving, but so are the subs?!?" Probably won't win over the "big sub" boys, though...

Don't get me wrong. Not all submariners are dinosaurs. Scratch a younger officer and most times you'll find someone not totally wedded to the notion that subs comes in only one size: huge and absurdly expensive. But there is an entire senior generation of leaders, not to mention the crabby old grey beard retired admirals, that need history's hook.

.
UPDATE2: I guess, given the current environment, that it's a good thing that they didn't call it the "Sea Warrior"...