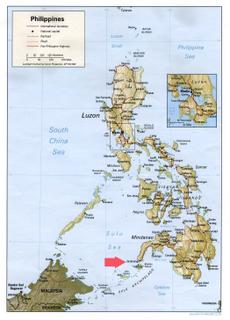 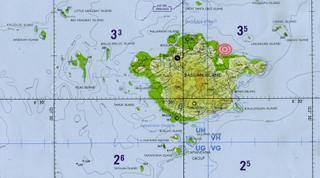 Ferry bombed in the Philippines as reported here:

A bomb stashed in a rubbish can exploded on a ferry in the southern Philippines as it was loading passengers Sunday morning, wounding at least 30 people, including nine children, military officials said. The region had been on alert for terror attacks.

The M.V. Dona Ramona was docked at the wharf at Lamitan, on the island of Basilan, around 7:30 a.m. (2330 GMT) as it prepared to depart for nearby Zamboanga. At least six people were badly burned, including a soldier.

The south is the homeland of the country's Muslim minority and a decades-old separatist insurgency.

Military spokesman Lt. Col. Buenaventura Pascual said in Manila that a homemade bomb was placed in a rubbish can. Brig. Gen. Raymundo Ferrer, who rushed to the scene, said a firebomb may have gone off near the ferry's canteen, citing a statement by the skipper and the nature of the victims' wounds.

"It's an IED," said Ferrer, the army commander in Basilan, referring to an improvised explosive device - the military term for homemade bombs.

"Initially, this could be a concealed explosive device without metallic parts. The apparent intention was to injure and scare people," he told a local radio station by telephone as he inspected the ferry's lower deck that was hit by the blast... Troops and police have been put on alert in major cities in the southern region of Mindanao because of possible diversionary attacks as the military wages a nearly 2-month-old offensive to capture a group of Abu Sayyaf members, including the group's chieftain Khaddafy Janjalani, in southern Maguindanao province.

While Janjalani and other Abu Sayyaf leaders were reported to be in Maguindanao, the rebel group has long organised units called Urban Terrorist Groups to strike in key cities, including in Basilan, which has always been regarded as a high-risk area for terror attacks.

The Abu Sayyaf, which is on US and European lists of terrorist organisations, has been blamed for a number of other bombings. Philippine security officials say the group also has ties with Jemaah Islamiah, which has cells in several Southeast Asian countries.

US counterterrorism training has been credited with helping the Philippine military oust the Abu Sayyaf from their southern strongholds, including Basilan, and capture or kill key commanders and members. The Abu Sayyaf is on the US list of terror groups.

BBC report here. As reported here someone is sure who it was:

The Abu Sayyaf group was the perpetrator of a blast which injured 30 people Sunday morning on a ferry in Basilan island, southern Philippines, said a Philippine official.

The vice mayor of Lamitan town where the blast took place, Jimmy Andong, told local media that the blast was the handiwork of Abu Sayyaf bandits, who were disguised as fishermen.

UPDATE: Not so fast, second report casts doubt on "terrorist" bombing as reported in the Manila Times here:

The Autonomous Region in Muslim Mindanao police director, Chief Supt. Sukarno Ikbala, was quick to dismiss speculations that the blast was terrorist-related.

He told The Manila Times that an accident triggered the explosion after materials used for dynamite-fishing, wrapped in paper, was ignited by a carelessly disposed cigarette butt. The explosive materials, he said, was purchased yesterday and was bound for Zamboanga.

Ikbala said the owner of the package remains unidentified.

But Pascual said that bomb experts, backed by K-9 dogs, said the “fumes were of gunpowder or some kind of chemical.”

A police source, who asked not to be named, said it was possible the explosion was terror-related.