Hurricane Relief: Bring in the Navy! 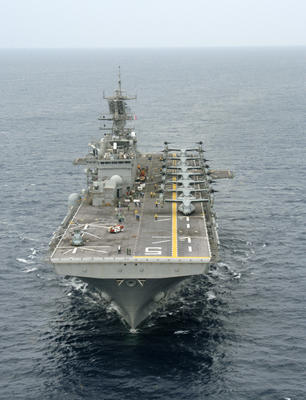 The Norfolk-based amphibious assault ship Bataan is standing by off the Texas coast to provide humanitarian assistance if called upon, 2nd Fleet spokesman Lt. Mike Kafka reported Aug. 29. Bataan, which recently completed a training exercise near the Panama Canal, “will remain in the vicinity of impacted areas until otherwise directed,” according to a 2nd Fleet statement.

At least two MH-60 helicopters are aboard the Bataan, and Kafka said three MH-53 helicopters out of Corpus Christi Naval Air Station, Texas, were to fly aboard Aug. 29, with another joining them Aug. 30.

As was shown during the tsunami relief effort, these large deck amphibs and their helicopter capabilities and their LCACs can perform a substantial role in getting aid into areas near the water where roads are out.

Gulfport is home to 3,665 active-duty Navy people, and a total of 1,256, including Seabees, sailors training for guard duty at Guantanamo and some family members, remained behind. Some of the Seabees remained on station in order to start getting the base back in working order once the hurricane passed, said Navy spokeswoman Corey Schultz.

Dooling said it was too early to tell if the Seabees would be able to help fix hurricane damage in the surrounding community.

“They’re going to have to fix themselves before they can go out and fix the community,” he said.

And this and this. 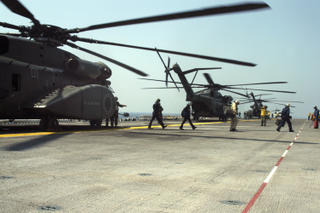 Army Lt. Col. Richard Steele, a spokesman for the First U.S. Army, said the Defense Coordinating Elements teams deployed to Alabama, Florida and Mississippi. Each team has as many as 30 people. They are equipped with handheld Iridium satellite phones and military single channel tactical satellite communications terminals for voice communications.

The teams will handle requests for military support from the Federal Emergency Management Agency and state officials and pass on those requests to military officials. If they approve the requests, the teams will then control and manage any military assets or systems sent to the disaster areas. 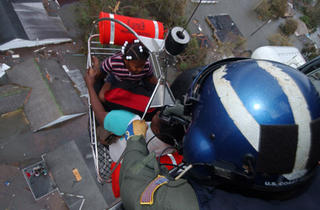 As usual, the US Coast Guard is doing a magnificent job. Their Katrina web site is here. Photo is from their site. Their aircraft have rescued over 1200 people.

The Army Corps of Engineers was preparing to support debris removal and laying plans to survey and begin emergency repairs on the levee system around New Orleans that partially gave way during the storm, Gene Pawlik, a Corps of Engineers spokesman, said.

In Mississippi, more than 1,900 Guard troops were providing similar support, basing their operations at Camp Shelby.

The Mississippi Guard coordinated with the National Guards in Oklahoma, Pennsylvania and Arkansas to add four UH-60s and three CH-47s to the relief effort. In addition, the Alabama National Guard is contributing an engineer battalion and military police battalion to Mississippi's hurricane response.

In addition to the 300 military police and 500 engineers it is sending to Mississippi, the Alabama National Guard had another 800-plus troops on duty to support that state's Emergency Management Agency, Army Lt. Col. Bob Horton, an Alabama Guard spokesman, said. These troops are staging support equipment around flood-struck areas, and 450 of them will head to Mobile today to support law enforcement officials and enforce security, he said.

In Florida, more than 700 Florida Guard members were on active duty, working out of logistical support sites in Miami and Homestead to provide ice and water distribution support.

The Guard was preparing to ship 1,000 cots to Louisiana to support relief operations there, officials said.

Krenke called the interstate cooperation a sign of the success of the Emergency Management Assistance Compact. This interstate agreement enables Guard troops from one state to support operations in another state and has significantly boosted the National Guard's response capability, she explained.

The Pentagon effort includes the Navy amphibious assault ship USS Bataan, whose helicopters have been flying relief missions from off the Louisiana coast.

The ship, which resembles a small aircraft carrier, can produce large quantities of fresh water and is equipped with 600 hospital beds. (Watch video report on storm-related health risks)

Several other ships, including a rescue and salvage vessel and the USS Iwo Jima, another amphibious assault ship, are on their way from Norfolk, Virginia, the Navy said.

The USNS Comfort, a floating hospital based in Baltimore, Maryland, will depart in coming days. A medical crew from Bethesda Naval Hospital will staff the ship. It has full hospital capabilities, including operating rooms and hundreds of beds.

More than 125,000 National Guard troops have been activated in 19 states and Washington, D.C., to help local agencies with traffic control, security, distributing food, and search and rescue, a Guard spokesman said.

The Coast Guard, whose crews have been assisting in the rescue of people stranded by high water in the New Orleans area, is recalling 550 reservists to assist in the relief effort.

The Air Force said it was sending two large cargo planes to the region -- a C-5 Galaxy to Louisiana and a C-17 to Mississippi.

Besides humanitarian aid, the C-5 is bringing in swift boats, which can maneuver in shallow floodwaters to ferry rescue workers and victims. The C-17 is outfitted to evacuate 36 sick and injured people at a time.