Diaster Relief- Give, Volunteer but Do Something!

Pick one! (material is from the websites of the agencies) 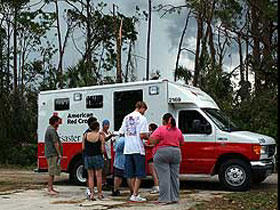 The American Red Cross has mobilized thousands of volunteers to respond in the aftermath of Hurricane Katrina, which completely devastated parts of Louisiana and left at least 55 people dead.

The Red Cross plans to send close to 2,000 volunteers in the area to begin the initial response in the next few days.

“Volunteers are truly the lifeblood of the American Red Cross, and we are calling on them now by the thousands to help support relief efforts in Louisiana and other states after Katrina,” said Pat McCrummen, American Red Cross disaster spokesperson. “We are looking at a long term, very significant response to this storm.”

The Red Cross is mobilizing every available resource from across the country including thousands of staff and volunteers to respond to this storm. Red Cross volunteers and donors are neighbors helping neighbors.

Volunteers are already on the ground staffing shelters for tens of thousands of people in five states—Florida, Louisiana, Mississippi, Alabama and Texas.

The Red Cross is launching the largest mobilization of resources for a single natural domestic disaster, in part because the extent of the damage is so widespread over a large geographical area. New Orleans Mayor Ray Nagin including sending nearly 1,900 staff and volunteers into the field in the next few days, and sending more than 250 Emergency Response Vehicles (ERVs) out to provide food and water to affected residents.

Southern Baptists gear up, too, including bringing laundries (a great idea for people who have been living in one set of clothes), see here 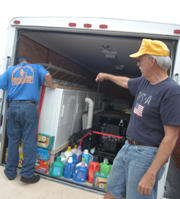 Laundry service
A Tennessee Baptist Disaster Relief crew headed to the Gulf Coast is equipped with a new laundry unit based out of First Baptist Church in Hendersonville, Tenn. David Acres, director of the state’s disaster relief teams, inspected the machines before departing from the staging area at Cherry Road Baptist Church in Memphis, Tenn. The system, capable of washing about 20 loads of laundry per hour, contains a hot water heater, four washer units and five dryer units, he said. Photo by Morris Abernathy )