In this post, I suggested that "Broken Window Theory" ("The Broken Window Theory is a social theory that says that small problems are important and need attention; unheeded, they will lead to larger problems.") applied so successfully by Mayor Guiliani in New York City is also applicable to the illegal activities now rampant on our southern border with Mexico. Now, in a Megan Basham article in The American Spectator another result of the effect of poor border enforcement is set out (indeed, the subtitle of the article on the Spectator web page is "Lack of border enforcement has made the drug gangs so bold that they are no longer content to keep a low profile on American soil.")

According to DEA officials, Mexican drug cartels now control 11 of the 13 largest drug markets in the country and wield more influence over our illicit drug trade than any other group. DEA reports show that in 2004, 92 percent of the cocaine in the U.S. came through the U.S.-Mexican border, up 15 percent from 2003. They also show that methamphetamine seizure at the border is up 74% since 2001.

These numbers demonstrate the futility of any drug policy that doesn't take into account America's porous border problem. Any laws that Congress or the states enact to curb local production of meth, such as busting up meth labs and moving ephedrine-containing cold medicines behind the counter, is undermined by the burgeoning business of Mexico's super labs. Restricting access to meth-making chemicals on our side of the Rio Grande has simply resulted in U.S. cities flooded with Mexican-made meth -- which is stronger, cheaper, and more addictive than its American counterpart.

BUT EVEN MORE DISTURBING than the Mexican traffickers' ability to get their product into the states is the disregard they increasingly hold for U.S. citizens. Lack of enforcement has made the drug gangs so bold that they are no longer content to keep a low profile on American soil. Whereas American citizens were somewhat sacrosanct to South American drug cartels in the past, today nearly anything goes. As an anonymous Dallas narcotics officer told the Associated Press in February, "We're seeing an alarming number of incidents involving the same type of violence that's become all too common in Mexico, right here in Dallas. We're seeing execution-style murders, burned bodies and outright mayhem....It's like the battles being waged in Mexico for turf have reached Dallas." Or, to put it as plainly as the 2005 International Narcotics Control Strategy Report did, "The violence of warring Mexican cartels has spilled over the border."

Besides widespread violence, the other problem plaguing our border security is corruption. Corruption among Mexican officials is so pervasive as to have become a joke. In the Mexican border town of Nuevo Laredo, so many police officers were on cartel payrolls, it prompted President Vicente Fox to suspend the entire 720-man force. Now there is evidence that our reticence to block illegal routes into the country is leading to increased corruption on our side of the border.

More than 55 government employees, including military personnel, have been indicted or pled guilty in southern Arizona on charges of drug and/or people smuggling in the past year (usually this means they just looked the other way as cartels brought their shipments through). And at least six federal agents on the Texas border have either been convicted or charged for taking bribes from drug dealers in the past few months.

The article goes to point out that the lax border enforcement is negatively impacting law-abiding citizens of both the US and Mexico. The pentultimate paragraph of the article:

Demanding that those who enter the U.S. do so legally is not about keeping innocent, hardworking immigrants from getting in; it's about keeping foreign drug traffickers, and all the butchery that attends them, out. Any amnesty policy for illegals as a whole is likely to be exploited by Mexican cartels and used to bolster their stranglehold on our southern border. To give these groups an even greater foothold through a lenient illegal immigration policy is to invite the kind of carnage already taking place in cities like Laredo, El Paso, Dallas, and Houston deeper into the U.S.

I am reminded of the difference in approach to drug abuse problems in the military between the Carter and the Reagan administrations. Under President Carter, the military tried counseling, rehab and understanding. All admirable, all failures. Along with casual drug use came the drug dealers and their enforcers, creating in some instances, a druggie "chain of command" operating in secret parallel with the official organization of ships and other units. With President Reagan came strict enforcement of the laws and zero tolerance. Most drug issues disappeared with the laying down of the law and a program of frequent random drug testing. Windows got fixed, one might say.

Now, faced with a broken border, the analogy changes slightly - instead of windows, we need to mend our fences, and we better get on it ASAP.

Update: Speaking of fences, take a look at this impressive border fence in Arizona: 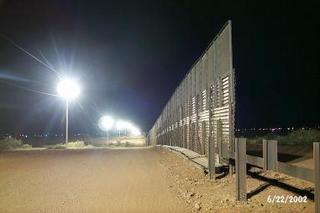 The Border Patrol does a good job of lighting a 15 foot high fence
(15 of the 20 poles light this fence); as you can see, where the
fence ends, one only has to step over a two foot high barrier.
There are 5 additional poles to the west of where I took this shot.