Hmm, this could be interesting:

Top U.S. military commanders in Europe are meeting here in August to develop a common understanding about their future role.

The focus of the two-day seminar is to candidly discuss what the European theater will look like in the year 2013, in order to achieve a strategic vision of influence for Europe and Africa.

“Just as U.S. military leaders found themselves at a critical time in history after World War II, we find ourselves at a pivotal moment where we can help shape the future of the European theater,” said Marine Gen. James Jones, commander of U.S. European Command. “We can’t afford to squander this opportunity.”

EUCOM’s leaders are using the seminar to identify opportunities that will allow the United States to counter extremism, terrorism and proliferation of weapons of mass destruction in the European and African regions.

“Our fundamental tenet is that EUCOM has the ability to influence our collective security through partnerships,” Jones said. “We need to ensure we have the right tools in place and a well-articulated common vision in order to prevent future conflicts from emerging.”

The meeting is being held on the USS Mt. Whitney (LCC-20) 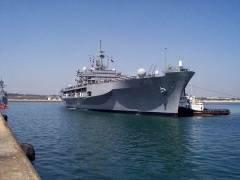