A strange 525 million-year-old fossil creature is baffling scientists because it does not fit neatly into any existing animal groups.
The animal, from the early Cambrian Period, might have belonged to a now extinct mollusc-like phylum, academics from America and China say.

Other researchers have suggested the creature could represent an early annelid or arthropod.

To my very untrained eye, I think it may be a "sea monkey" fossil. 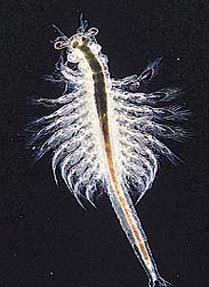