Commander Pacific Fleet on Why China Needs Its Navy

"Clearly, the Chinese are developing a very capable modern military, especially the navy," Adm. Roughead said in an interview at his Pearl Harbor headquarters.

If that navy "is to ensure the free flow of commerce, that would not be surprising," he said, nodding toward the sea lanes in the South China and East China seas through which pass the oil and raw materials that feed China's expanding economy, not to mention its soaring exports.

The admiral added, however: "What if the intent is not purely to defend the sea lanes?" He left the question open.

Adm. Roughead said his command had been watching the maneuvers centered in China on the Shandong Peninsula across the Yellow Sea from the Korean Peninsula.

He was keenly interested in learning what ships and aircraft the Chinese and Russians had sent into the war games, how they operated together, and how they integrated their commands and communications.

More on the Russian-Chinese war games here and here.

China's vital sea lanes are portrayed in the map below. Red blobs represent location China has or is attempting to secure for sea lane control purposes. 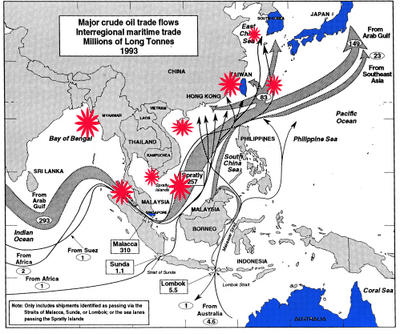 Joint military exercises on China's Shandong Peninsula mark the start of a strategic initiative in which Russia would support Beijing's suppression of any move by Taiwan towards independence, a Japanese minister has suggested.

Economics, Trade and Industry Minister Shoichi Nakagawa noted that the unprecedented Sino-Russian war games, which ended on Thursday, were directed at curbing terrorism and separatism, "which obviously means they have Taiwan in mind, as well".