HC-2’s Detachment ONE (the “Ghostriders”) assumed the SIXTH Fleet executive transport mission from HS-1 in 1987 and continues to operate from Capodichino Airfield in Naples.

The detachment flies the venerable UH-3H Sea King. This particular H-3 was produced by Sikorsky in 1962 and has been stationed in Naples since 1995, continuously supporting SIXTH Fleet operations. Affectionately nicknamed “Phyllis” by her detachment, the helicopter is maintained by 20 flight crew and enlisted personnel. 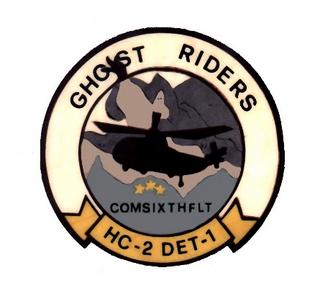 Update: The H-3's are being phased out, as reported here. I am led to believe that Ghostrider 741 is the above-mentioned "Phyllis."

One of the Naples-based workhorse choppers, “Ghost Rider 741,” already has been stripped to its mostly aluminum shell, and in the coming weeks, Seabees from Naval Support Activity Naples will cut it up and local contractors will take it away as scrap metal.

“Ghost Rider 743” will meet the same fate this fall.

The Naples-based detachment, of which the helicopters are permanently based, but the sailors are not, got its name because it rode with 6th Fleet’s former flagship, the USS La Salle, which used to be painted white and was called the “great ghost” as it sailed.

The Norfolk, Va.-based HC-2 has 12 of the aircraft in its inventory; six in Norfolk, two in Naples and four that make up the “Desert Ducks” Detachment 2 stationed in Bahrain. Five of the 12 already have been decommissioned.

Like so much of what is in the U.S. military’s inventory, the helicopters come in a variety of versions. There’s the VH-3D, used for presidential and executive transport, the SH-3H that is carrier-based for anti-submarine warfare, and UH-3H, used for torpedo recovery, logistics and search and rescue.

Over the coming years, the Navy is replacing its aging fleet of the roughly $6.4 million Sea King twin engine helicopters with MH-60S Knighthawks.