News on the sinking of the Queen of the North starts here with a report of an unaccounted for passenger couple:

The RCMP has taken over the search for two missing people who may have been aboard a B.C. ferry that sank in the early hours of Wednesday morning.

The Coast Guard called off its water search Wednesday evening saying too much time had elapsed for the couple to have survived in the frigid Pacific waters, according to air force Captain Jamie Davidson.

It's not clear whether the pair, who had reservations on the passenger ferry, were among the nearly 100 passengers aboard when it struck a rock and sank in choppy waters near Gil Island in Wright Sound.

Coast Guard officials had previously said all passengers and crew aboard B.C. Ferries' Queen of the North were accounted for, but later confirmed with globeandmail.com that they were uncertain about the whereabouts of Gerald Foisy and Shirley Rosette, both of 100 Mile House.

Coast Guard Captain Leah Byrne said no one has heard from the pair since the accident, including their families. But, B.C. Ferries said in a press release that it has unconfirmed reports from passengers that the two were seen at the rescue centre at Hartley Bay.

The RCMP's missing persons division has taken over the search for the couple.

The accident happened shortly after midnight on Wednesday.

The Queen of the North — carrying 99 passengers and crew — was sailing south to Port Hardy from Prince Rupert, a 450-kilometre trip along what is known as B.C.'s Inside Passage, a series of islands just off the north coast of the province.

The 125-metre-long vessel had left Prince Rupert about 8 p.m. PST on Tuesday and was about five hours into the trip when the accident happened.

The residents of Hartley Bay pulled together a rescue effort that saved many lives as reported here:

What the rescuers saw when they reached the open waters of Wright Sound after a 20-minute ride across a dark, windy stretch of water was an image that left them shaken. There, just off the north end of rugged Gil Island, the massive Queen of the North, a ferry that can hold up to 700 people and 115 cars, was sinking, ablaze with lights. Drifting nearby were five life rafts lashed together, where most of the 101 passengers and crew were huddled in the rain.
***
The boats from Hartley Bay eventually shuttled 64 people back to the community. Other survivors were taken aboard the Coast Guard vessel Sir Wilfrid Laurier, which was on scene by 2:15 a.m.

The sea is a dangerous place... 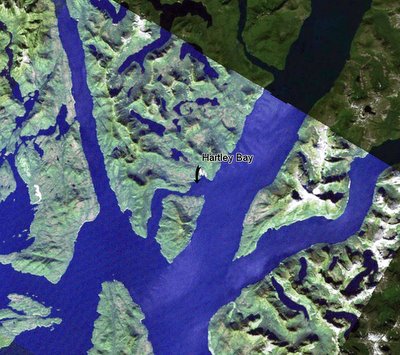 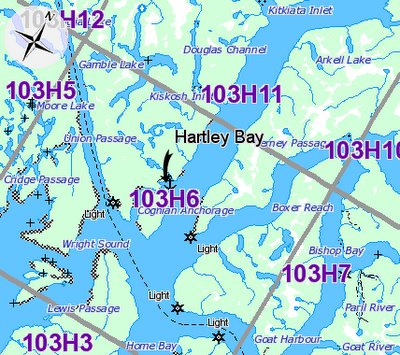 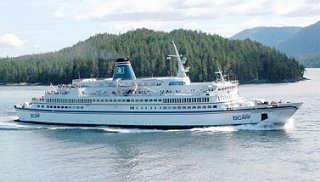 The ship was on a regular scheduled cruise southbound to Port Hardy carrying about 16 vehicles, and 101 passengers and crew.

Weather at the time was reported to be 50 knot winds with choppy seas with heavy rain squalls. A nasty night.

After an hour on the surface, she foundered and went to the bottom, resting in 450 m of water. All passengers
except two who unfortunately had perished in the mishap and all crew were safely evacuated from the ship via her
lifeboats. The citizens of nearby Hartley Bay heard the Mayday call and in the truest sense of the traditions of
the sea reflecting providing assistance and help to ships in distress, rapidly dispatched their boats to the
scene.

This last site has a tour of the Inside Passage from which the lower photo of the Queen of the North was taken. An excellent job has been done by the owner of the site covering this sinking. UPDATE2: Changed sinking location map out for two taken off the Atlas of Canada site.