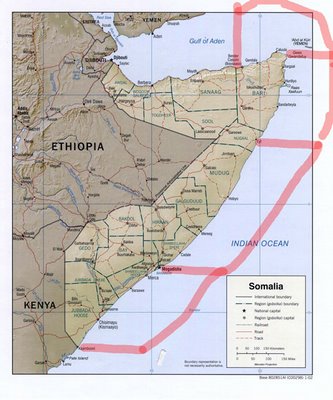 The lack of a government in Somalia hurts its fisherman, as noted in this opinion piece: "Stealing My Fish, Adding Insult to Economic Injury":

A former British protectorate in the north-west of former Somalia, Somaliland split from the rest of Somalia after a bloody civil war in 1991. Unlike much of the region in southern Somalia, Somaliland has succeeded in establishing peace and begun to rebuild the country left shattered by fierce fighting, holding its first democratic parliamentary elections last September.
Here Faysal Diriye, a Somalilander living in the Canadian city of Ottawa, gives his opinion of the situation and gives a grim warning of the future if the situation does not improve.

"Stealing fish from another country’s territorial waters is an act of piracy. For Yemenis to catch fish outside their national territorial waters is forbidden. To have them continuously scooping out Somaliland’s rich marine resources is not only unjust but is an international theft.
The question is: For how long can we sit back and watch our fish be stolen? These incursions have gone on for the past fifteen years, but very recently the level of fish piracy became unbearable.
After the ban of livestock trading imposed on Somaliland by Arab countries, the illegal fishing comes as another economic slap in Somaliland’s face by a neighboring Arab country - Yemen. It poses another harsh question: Wasn’t the ban of Somaliland’s livestock harsh enough?
***
Somaliland fishermen might be compelled to defend their marine resources by arming themselves, and would not hesitate to defend their territorial waters at any cost.
Illegal fishing in Somaliland’s Exclusive Economic Zone (EEZ) may result not only in stolen fish, but also in lost lives.
Once shots are fire Yemen will claim there are “terrorists” in the Red Sea, also known as poor Somaliland fishermen defending their rights.
Recently Yemen’s Foreign and Migrants Affairs Minster Abubakr al-Qirbi said that “Somali pirates” kidnapped a number of Yemeni fishermen and their boats.

Was the Minster calling the Somaliland Coastguards pirates?
The minster also spoke of the danger of piracy in the Golf of Aden. Yet he failed to mention that his own country poses a greater threat to Somaliland’s fishing communities than anything else.
So much for Yemen being a good neighbor, and its hollow mantra of “helping” Somalis. Clearly, its rhetoric contradicts its actions. Aside from the livestock ban, illegal fishing, the plight of the Somali refugees in Yemen where they are reported to have experienced rape, torture and murder, and sending weapons to Somalia - where some of these weapons would be used against Somaliland: there has yet to be seen the so-called “love” that our Yemeni “brothers and sisters” are supposed to share with us.

My earlier posts on the Somali fishing problem here and, in part, here (the part about the Somali Exclusive Economic Zone).

Some info on Somalia's Coastal and Marine Ecosystems here.

UPDATE2: Preamble to UN Conventionof the Law of the Sea here covering "Exclusive Economic Zones." Happy reading.
Posted by Mark Tempest at 3/26/2006 11:59:00 AM