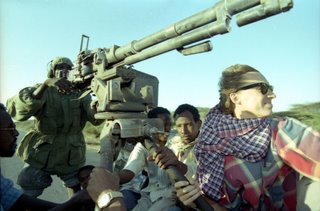 Nice summary of events with the Somali pirates, warlords and credulous media here:

The piracy has prevented shipments of food aid, which two million Somalis, in danger of starvation because of prolonged drought, desperately need. It's cheaper and, without the pirates, safer, to ship the food relief by ship. But the coast is long, the warships are few and the pirates determined.
***
The Somali warlord, whose men had been arrested by the U.S. Navy the day before, said the Americans fired first and that his men were actually patrolling the coast looking for illegal fishing. Somali warlords know how to play the media, and realize that a lot of anti-American media outlets will pick up on the "American's fired first and we Somalis were just trying to patrol our coast and keep illegal fishing boats away" angle. The reality is that the pirates do patrol the coast, looking for fishing boats they can capture for ransom, or poor fishermen they can simply rob, including killing the fishermen and stealing their boats. 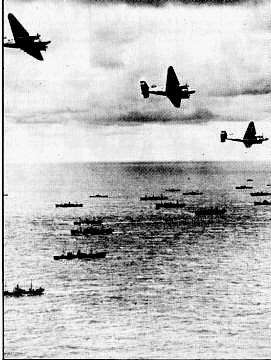 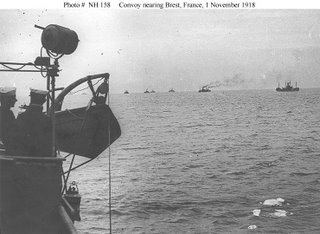 I wonder what it will take for the UN World Food Program to ask for some escorts for their food ships? Escort duty, while not exciting, is a Navy role... (UPDATE2: First photo is of a WWII convoy under aircraft escort near shore from the U.S. Navy Armed Guard World War II Veterans site. Second photo is of convoy nearing France in WWII from here.)

UPDATE: Another nice summary, this time of the situation in Mogadishu here by the United Nations Office for the Coordination of Humanitarian Affairs (OCHA):

A dozen factional leaders have divided the city into armed zones yet not one has legitimate authority in the area of their claim. New warlords are also continually emerging all of whom compete for the control of the city's sixteen districts. Targeted kidnappings and violence against Somali nationals and humanitarian workers continues. Recent assassinations include a BBC journalist (May 2005), the Somali peace activist Abdul Qadir Yahya (July 2005) and an attempt on the life of the Transitional Federal Government (TFG) Prime Minister (November 2005).

UPDATE2: And right on cue, the BBC reports fighting in north Mogadishu here:

Heavy fighting has broken out in the north of Somalia's capital, Mogadishu, with residents fleeing from the area.
***
Supporters of some of Mogadishu's militia leaders are clashing with an armed Islamist group seeking to establish law and order.

The dispute has been over the port area, which is currently controlled by powerful businessmen.
***
The fighting in northern Mogadishu pits a new group, the Alliance for the Restoration of Peace and Counter-Terrorism, against the Islamic courts' militia.

At least five warlords-cum-ministers in the transitional government are behind the new alliance, opposed to the Islamic courts.

The courts have set up Mogadishu's only judicial system in parts of the capital but have been accused of links to al-Qaeda.

Their critics accuse the courts of being behind the killing of moderate Muslim scholars.