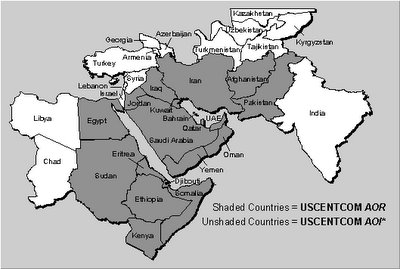 Email from CENTCOM suggested I take a look at the United States Central Command Posture for 2006. I have, and you can too, by clicking on the link.

- U.S. forces will also continue to maintain an unmatched naval and air presence in the region that deters destabilizing activities by Iran, while safeguarding the region’s vital links to the global economy. As always, we must guard against and be ready to respond to the potential for strategic surprise and unwelcome developments, such as a major terrorist strike against oil infrastructure, a closure of one of the region’s strategic sea lanes, escalating political strife, or nation state expansion or support of terrorist activity. Given the ongoing volatility in the Middle East, the Horn of Africa, and Central Asia, these areas will continue to require considerable regional and international political, diplomatic, and military effort and focus in the years ahead.

-IV. GLOBAL COUNTERTERRORISM AND THE LONG WAR
Defeating al Qaida and associated ideological movements will require significant counterterrorism cooperation among our allies and partners not only within the CENTCOM AOR, but throughout the globe. It will also require the dedication of military, intelligence, and many other components of national power. Our network of allies and agencies will eventually defeat the al Qaida network, but we have yet to master the integration of national and international power to achieve success against this ruthless, borderless enemy. We have long experience with nation state warfare. We must, in the years ahead, learn to organize ourselves to defeat a stateless enemy capable of delivering state-like destruction without having state-like vulnerabilities. Defeating such an enemy requires a careful study of its clearly articulated strategy and vision.

-B. PRINCIPLES OF GLOBAL COUNTERTERRORISM AND THE LONG WAR
For the first time in our history, the principal enemy facing the United States is not another nation state – it is an ideologically-driven, borderless network. Such an enemy requires new thinking on how we organize and fight. Militarily, we will continue to kill and capture al Qaida leaders, shut down training camps, destroy operational cells, and prevent al Qaida and associated movements from exploiting ungoverned spaces. Certainly, such action requires precision targeting and highly sophisticated intelligence networks of our own. Nonmilitary measures to defeat al Qaida will be increasingly decisive in ultimately bringing about the network’s defeat. In order to counter its fanatical ideology and diminish its sources of strength, all elements of international and national power – diplomatic, political, economic, financial, the private sector – must be used to pressure the entire al Qaida and associated movement network over time.

-(Concerning Iraq) The terrorists and foreign fighters are the smallest but most lethal group. The al Qaida in Iraq (AQI) network, led by the terrorist Zarqawi, is the dominant threat within this group. AQI’s objective is to create chaos in Iraq by inciting civil war between Sunni and Shia through terrorist acts such as the recent bombing of the Golden Mosque in Samarra. Such mayhem, they believe, will topple the elected government of Iraq and drive Coalition forces from the country. This could enable AQI to establish safe havens for Islamic extremism within Iraq from which to launch terrorist attacks against other moderate regimes in the region. Zarqawi has pledged his allegiance to Osama bin Laden, and the goals of AQI support bin Ladin’s broader objective of establishing a Caliphate throughout the Middle East. AQI’s network is well-organized and funded. Its cellular structure permits recovery and retention of lethality even when key Zarqawi lieutenants have been killed and captured.

-(Concerning Afghniastan) The Taliban operates primarily in the southern and eastern provinces and Kabul. Its core supporters, mostly Pashtun, seek its return to power. The Taliban has demonstrated resilience after defeats. They appeared tactically stronger on the battlefield this year, and they demonstrated an increased willingness to use suicide bomber and IED tactics. While the Taliban remain very unpopular in most parts of the country, pockets of hard-core support remain. Taliban activities remain clearly linked to al Qaida funding, direction, and ideological thinking. The Taliban do not have the capability to exercise control over large areas of Afghanistan, but they are disruptive to reconstruction and reconciliation efforts. It is increasingly clear that Taliban leaders also use Pakistan’s FATA to organize, plan, and rest. Pakistani efforts to deny this safe haven, while considerable, have yet to shut down this area to Taliban and al Qaida use.

-(Concerning the Horn of Africa) The Horn of Africa is vulnerable to penetration by regional extremist groups, terrorist activity, and ethnic violence. Al Qaida has a history of planning, training for, and conducting major terrorist attacks in this region, such as the bombings of U.S. Embassies in Kenya and Tanzania. The volatility of this region is fueled by a daunting list of challenges, to include extreme poverty, corruption, internal conflicts, border disputes, uncontrolled borders and territorial waters, weak internal security capabilities, natural disasters, famine, lack of dependable water sources, and an underdeveloped infrastructure. The combination of these serious challenges creates an environment that is ripe for exploitation by extremists and criminal organizations.
More specifically, Somalia, a failed state in the heart of HOA, is a safe haven for East Africa al Qaida associated cells. There is also an increasing number of piracy operations that have been planned and launched from Somalia. In January 2006, our naval forces seized a vessel in the international waters off the Somali coast engaged in piracy. We will continue to monitor and, when necessary, take action against such destabilizing activities in the region.
Sudan remains a flashpoint of violence, particularly in the volatile Darfur region where over two million people have been displaced and an estimated 200,000 have been killed in the past three years. Ongoing peace talks there remain a challenge, and the potential for ungoverned space in Sudan to be exploited by terrorist groups is high. Additionally, the festering border conflict between Ethiopia and Eritrea has the potential to escalate into a full-scale war that would destabilize both of these countries, while potentially spreading instability throughout the Horn of Africa.

(Concerning Iran and Syria)
-A. IRAN
The situation with Iran is tense, and the possibility for miscalculation with U.S. forces remains high. CENTCOM forces in the region continue to watch Iran carefully to prevent any destabilizing activities that contribute to internal Iraqi or Afghan frictions, or threaten regional stability. Iran’s quest for nuclear weapons capability is particularly troubling. Iran seeks “creeping normalcy” that will permit international acceptance of its nuclear fuel cycle, while buying time for potential covert nuclear activities. We believe that Iran's declared objective of self-sufficient nuclear fuel production is coupled with the ulterior goal of weapons production. Iran’s withdrawal from the IAEA’s Additional Protocol or the NPT could decrease the timeline necessary to produce a weapon. A nuclear-armed Iran would dramatically increase instability in the region and could pressure other countries in the CENTCOM AOR to consider acquiring such weapons.
Iranian-sponsored activities in Iraq continue to be unhelpful. Iran is pursuing a multi-track policy in Iraq, consisting of overtly supporting the formation of a stable, Shia Islamist-led central government while covertly working to diminish popular and military support for U.S. and Coalition operations there. Additionally, sophisticated bomb making material from Iran has been found in improvised explosive devices (IEDs) in Iraq.
While generally thought to be for defense, Iran continues to build a credible military capable of regional power projection. It has the largest military capability in the region and a record of aggressive military action in and around the Arabian Gulf. Its power projection capabilities stem primarily from its navy and ballistic missiles. Iran’s military consists of over 350,000 personnel with an additional 300,000 trained reserve/Basij Forces that could be mobilized in times of crisis. The Iranian Armed Forces include two distinct, parallel military organizations – the Islamic Revolutionary Guards Corps (IRGC) and the Regular military forces. Each controls its own ground, naval, air, and air defense forces and equipment.
In addition to defending against external threats, the IRGC also focuses on an internal security mission and is the lead Iranian agency for supporting terrorism. Competition between the IRGC and Regular forces for limited resources and competing chains of command make Iranian military intentions difficult to decipher. This heightens our concern for the potential for miscalculation with U.S. forces in the region.
Iran’s ground forces are arrayed across the country with the majority of combat power along the Iran-Iraq border. The Iranian navies continue their rapid growth. The IRGC Navy has been developed primarily for the Strait of Hormuz scenario in which Iran would attempt to "internationalize" a conflict by choking off oil exports through the Strait. To disperse large quantities of recently purchased small boats, high speed missile boats, torpedo fast attack craft, and midget submarines, Iran has embarked upon an expansion project for naval bases throughout its littoral. Asymmetric military strategies and naval force modernization, a key national priority, enhance Iran’s capability for power projection in the region.
The IRGC Air Force maintains control over most of Iran’s ballistic missiles and rockets. The accuracy and reliability of its rocket systems vary, but Iran is capable of targeting all Gulf States, the Arabian peninsula, Israel, and U.S. and Coalition forces in the region with little warning.
In addition to Iran's conventional and ballistic missile capabilities, another lethal aspect of Iran's power projection is its ties to regional and global terrorism. Iran remains on the U.S. State Department's list of state sponsors of terrorism and provides extensive support to the Lebanese Hezbollah and several Palestinian rejectionist groups. Along with this support comes influence. Additionally, Iran's own intelligence elements are stationed throughout the CENTCOM AOR and beyond and are trained and prepared to execute terrorist attacks at the direction of Tehran.

-B. SYRIA
Despite reports of stepped-up activities by Syria’s security establishment to interdict foreign fighters moving into Iraq, Syria remains the central transit point for al Qaida’s foreign fighter and suicide bomber network, which is responsible for the deaths of thousands of Iraqi civilians. As a repressive authoritarian state, the Syrian government has the capacity to do more to pressure the extremist network moving through its country. Moreover, it has done little to suppress the Iraqi Baathist insurgent and financial networks that continue to attack Iraqi government officials, infrastructure, and military forces. Syrian support for Iranian meddling in Lebanon, and its own intelligence and intimidation activity in Lebanon, show Syria’s establishment to be unwilling to play a constructive role in regional security.

CENTCOM has a lot on its plate and it all is dangerous.

UPDATE: I see Lex posted on this a couple of days ago, which goes to show that I should (a) check my email more often and (b) visit Lex's site more often. On the other hand, I am but a retired SWO reservist and I included a free map (liberated for your benefit). By the way, Lex is always worth reading...
Posted by Mark Tempest at 3/18/2006 09:35:00 AM