Tamil rebels blow themselves and a Sri Lankan gunboat up 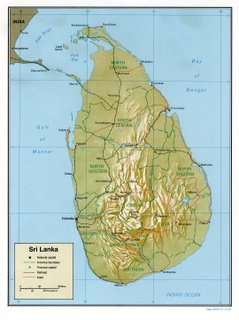 Reported here, another incident involving Tamil rebels taking themselves out when blowing their boat up:

"The navy suspected that the trawler was involved in gun-running and got near it to carry out a search," a defence official told the AFP news agency.

As the navy drew near, those on board the trawler "blew themselves up", he said.

Rebel spokesman S Puleedevan denied the Tamil Tigers were involved in the incident.

"There are a lot of smuggling and illegal activities going on in that area, including illegal immigration. It could be one of those boats involved," he told the Associated Press news agency.

In January, suspected Tamil Tigers blew up a similar navy gunboat, killing 15 sailors in a suicide attack near the port of Trincomalee in the north-east, officials said.

At least six Tamil Tiger rebels were killed and eight Sri Lankan Navy personnel went missing Saturday when rebels blew up their trawler and sank a naval gunboat that approached the vessel for inspection.

"It was not an attack on us," Brig. Prasad Samarasinghe, a military spokesman, said. "They got scared as we approached them and blew themselves up."

The force of the blast from the trawler sank the naval vessel which had 19 crew members on board. "Eleven sailors were rescued and eight are missing," Samarasinghe said.

This incident follows the capture of a suspected Tiger trawler on March 22 as reported here:

The fishing boat, which was within a restricted zone, was detained along with five people aboard, the military said.

A subsequent search led to the discovery of 20 dynamite sticks, it said, adding the fishing crew were being questioned.

The incident came as troops came under attack at Manalkadu in the Jaffna peninsula and retaliated. They later recovered an automatic assault rifle, the military said.

The Sri Lankan Navy has repeatedly accused the Tigers of taking the cover of fishermen to attack security forces.

Of course, some fishing with dynamite does occur in the oceans of the world. More here and in Sri Lanka here.