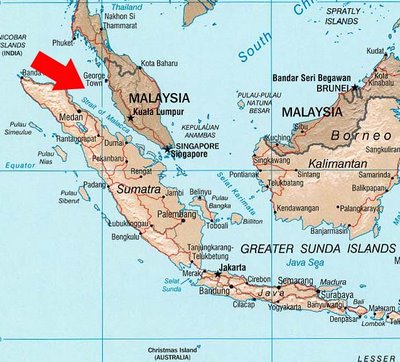 Reported as Malaysia urges insurance cos to remove Malacca Strait from security blacklist:

Malaysia urged insurance companies to remove the Malacca Strait from a list of dangerous waterways as it launched a new coast guard to boost security in the area.
"We hope that the international insurance companies will reconsider their decision to classify the Straits of Malacca as a war zone," Deputy Prime Minister Najib Razak said.
"The statistics do not bear that fact. This area is safe from any global terrorism," Najib said at the launch, which came as Malaysia hosts a two-day meeting of regional heads of coast guard agencies.
"All this while the only incidents are sea robbery and piracy. There is no evidence to suggest that the incidents are connected to regional or global terrorism."
Najib, also defense minister, said the number of piracy cases in the vulnerable strait has dropped to one between June and December last year, compared to 18 cases in the same period in 2004.
There have been no cases of piracy in the strait so far this year, he added.
The Lloyd's Market Association's Joint War Committee in July last year added the strait to a list of 20 areas worldwide -- alongside Iraq, Lebanon and Nigeria -- that it deemed security threats to shipping.
The classification by the LMA, a body that advises members of insurer Lloyd's of London, could result in some underwriters imposing additional premiums on ships plying the strait.
The launch of the Malaysian Maritime Enforcement Agency coast guard unit at Port Klang, Malaysia's biggest port located west of the capital, was attended by coast guard agencies of 16 Asian countries, the US and Australia.
Malaysia last November set up the coast guard at an initial cost of 69 mln rgt to boost security in the strait, which separates the Indonesian island of Sumatra and peninsular Malaysia.

Amazing what the effect of a threatened increase in insurance rates has been.

It should be noted that the ICC Commercial Crime Services "piracy" definition is pretty inclusive and does collect information on such things as theft from a vessel at anchor as well as attacks and seizures of ships. This does tend to inflate the number of pirate attacks.

Washington and its allies fear militants in Southeast Asia could hijack a ship and use it as a sea-borne bomb.

He said piracy and sea robberies in Malaysia's part of the strait had fallen sharply, with only one reported case in June-December 2005, compared to 18 in the same period a year earlier.

Overall, pirate attacks in the strait fell to 12 last year from 38 in 2004, according to the International Maritime Bureau, which monitors such incidents.

And some support here:

Following the Sept. 11, 2001 terrorist attacks, Washington and its allies feared militants could inflict global economic devastation with a high seas assault in the Malacca Strait in Southeast Asia — one of the world's busiest shipping lanes.

More than four years later, analysts say tougher law enforcement in the region has helped contain the threat of piracy in the strait, which lies between Indonesia's Sumatra island and Malaysia and Singapore. Still, vulnerabilities remain.
Indonesia lacks resources to patrol the coastline of Sumatra and other islands in its vast archipelago. Islamic militants are believed to have moved freely in waters north of Sulawesi island, about 1,200 miles east of the strait, en route to sanctuaries in the Philippines.
On a trip to Indonesia last week, Secretary of State Condoleezza Rice said maritime security is a top priority in the region, noting that one-quarter of the world's oil and trade pass through the Malacca Strait every year.
"Southeast Asia is more water than land," Rice said. "We are working with Indonesia and others to close this region's waterways to drug smugglers and human traffickers, pirates and weapons proliferators."
Tougher law enforcement has helped. Attacks in the Malacca Strait fell to 12 in 2005 from 38 the previous year, according to a report by the International Maritime Bureau, a maritime watchdog. Tens of thousands of ships pass through the strait annually.
Indonesia, Malaysia and Singapore have started joint air and sea patrols, while neighboring Thailand is also getting involved in the policing.
Australia is advising the Philippines on maritime surveillance amid concerns that Indonesian recruits of al-Qaida's regional ally, Jemaah Islamiyah, are sneaking into terror training camps in the southern Philippines. The Abu Sayyaf, another group linked to al-Qaida, operates in the area and has been blamed for numerous kidnappings and bombings.
"What was a problem of some concern has now been ... brought under control," said Tim Huxley, an expert on Asia-Pacific security at the International Institute for Strategic Studies, based in London. "Some of the reportage on this issue over the years has given the impression that the strait is highly dangerous. The figures show that that's not the case."
***
Territorial sensitivities about a navy chasing suspected pirates into another country's waters in so-called "hot pursuit" could also make it easy for criminals to slip away, said Christian LeMiere, Asia editor for Jane's Country Risk in London.
"There are doubts about the effectiveness of these patrols," he said. He noted that pirates are elusive because they operate in small, inflatable boats, often under the cover of darkness. In some cases in Indonesia, law enforcement authorities are suspected of colluding with pirates.
Some security experts have said terrorists could try to seize an oil tanker, steer it into a harbor and detonate it in a giant ball of fire. LeMiere said a more likely scenario would involve pirates seizing a tanker, blocking sea traffic and creating a huge oil slick.
Last year, the Joint War Committee of the Lloyd's Market Association put the Malacca Strait on its list of war risk areas, and some shipowners paid additional premiums for passage through the waterway. But industry leaders say many reported attacks in the region occur on moored ships of small or medium size, and amount to little more than petty theft.
"There is a very distorted definition of piracy as far as this region is concerned," said Daniel Tan, the Singapore-based secretary-general of the Federation of ASEAN Shipowners Associations. "A lot of these incidents are occurring within territorial waters, within port areas, on anchored ships."

More on the "hot pursuit" issue here, Malaysia argued nearly the same points last year in May, as noted here. Some examples of new cooperation found bewtween the littoral states found here and here. Red arrow on map points to Strait of Malacca.
Posted by Mark Tempest at 3/21/2006 06:58:00 AM