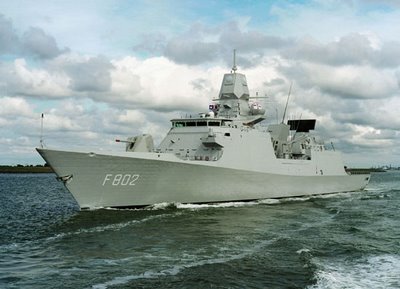 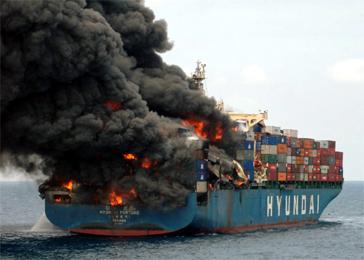 HNLMS De Zeven Provincien, a destroyer from the Netherlands and the command ship of Combined Task Force 150, came to the aid of a distressed vessel and rescued 27 people off the coast of Yemen earlier this week, while conducting maritime security operations (MSO) in support of Operation Enduring Freedom in the area, a statement issued by the US Naval Forces Central Command, said here yesterday.
***
CTF 150 is one of three task forces acting under the direction of Vice-Admiral Patrick M Walsh, US Naval Forces Central Command. While operating as a part of their MSO mission in the Gulf of Aden, De Zeven Provincien provided assistance to Motor Vessel Hyundai Fortune at approximately 11am local time. Approximately 43 miles off the coast of Yemen, the cargo ship was in distress as the result of a large fire onboard. The cause of the fire is not known at this time," it sadded.

The De Zeven Provincien crew came to the aid of the cargo ship by rendering fire fighting assistance, evacuating the burning ship's crew and offering humanitarian aide and medical care once onboard. The fire could not be contained; the master of the cargo ship gave orders to evacuate the ship.

The De Zeven Provincien commanding officer, Captain Maarten Stenvert, said his crew performed the rescue in a "superb manner." "They were continuously aware what was going on and of the potential dangers that the Hyundai Fortune posed to them such as explosion, falling containers, among others" said Stenvert. The Hyundai Fortune's crew is comprised of 27 personnel. One crewmember sustained non-life threatening injuries and has been evacuated to the French Navy aircraft carrier FS Charles De Gaulle, which hosts the nearest surgical facility, by a Lynx helicopter from the French destroyer FS Montcalm (D 642) for further examination. CV Charles de Gaulle and FS Montcalm are part of coalition TF 473, which is led by French Rear Admiral. Xavier Magne and is supporting Operation Enduring Freedom.

The remaining 26 crewmembers evacuated from Hyundai Fortune will be transported to shore, according to Stenvert. Stenvert credits the MSO mission for enabling coalition forces to rescue and provide humanitarian aide. "Because of the active patrolling in the light of MSO," said Stenvert, "De Zeven Provincien was able to close the merchant vessel under distress with no time delay. Therefore, it was possible to render assistance immediately." De Zeven Provincien is the Combined Task Force 150 command ship. Commodore Hank Ort of the Royal Netherlands Navy leads CTF 150. The coalition forces of CTF 150 conduct MSO in international waters of the Gulf of Aden, Gulf of Oman, Arabian Sea, parts of the Indian Ocean and the Red Sea.

A fire at sea can ruin your whole day...

UPDATE: Cargo Law has much more (in a very slow loading site) here. US NAVCENT has more photos here, including the following provided by the Royal Netherlands Navy: 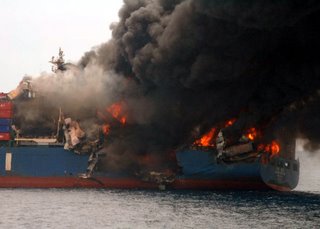 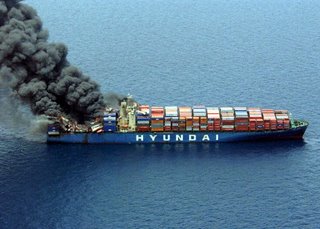 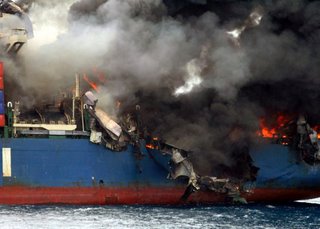 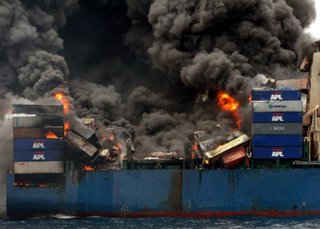 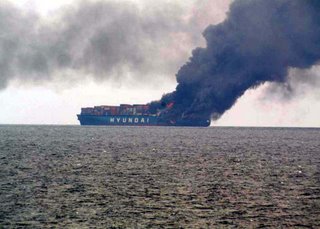 Some pretty heavy damage port side after (port quarter), below the main deck.
UPDATE: Speculation is that a container or more of fireworks is involved as a cause.
UPDATE: (3/28/06) Cargo Law has gone to a second page with daily updates here. Still very slow loading. Reports vessel is now being towed to port.
UPDATE: (3/30/06) As comment from Martin (below) states, there are denials that fireworks were involved in the fire.
UPDATE: 4/1/06) Additional photos: 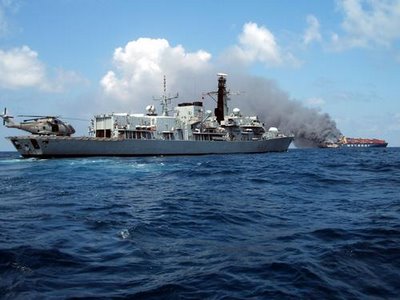 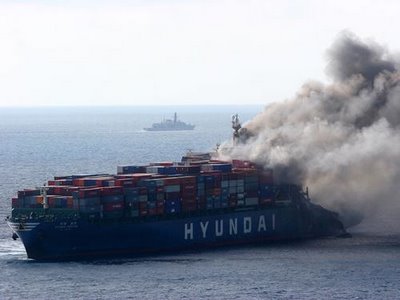 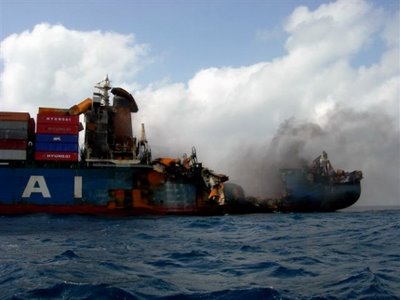 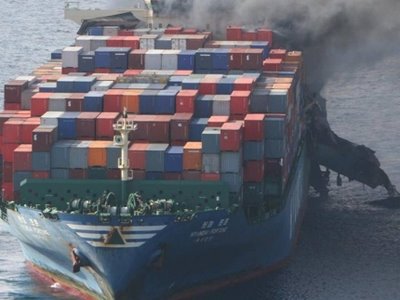 CargoLaw has more post fire photos here. The stern of the vessel took some heavy damage- nearly burning down to the water line. Also, many more photos here at the SvitzerWijsmuller slavage company site and from Royal Navy (UK) here. The new additions to this post are from those sites.
Posted by Mark Tempest at 3/23/2006 11:26:00 AM